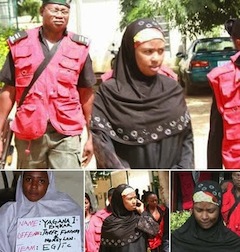 Nigeria’s anti-graft organisation, the Economic and Financial Crimes Commission, EFCC, says it has secured an order of the Federal High Court, Kano for forfeiture of the properties of one Ms Yagana Ibrahim Bukar, a female banker, for fraudulent financial activities including money laundering.

Also known as Aisha Shettima Noor by her friends and associates, the female banker is to forfeit all her property to the Federal Government as they are believed to be proceeds of the alleged crime.

The forfeiture order, the EFCC said, followed the refusal of the accused who is being prosecuted on two separate criminal charges bordering on money laundering, stealing and obtaining by false pretence, to present herself for trial after she was granted bail upon arraignment.

She is alleged to have forged various personal and official documents which she used in withdrawing huge sums of money from an Azman Oil and Gas Limited account domiciled with one of the new generation banks in Kano, while being the Account Officer of the company in 2013.