Jonathan leaves for pilgrimage to Israel 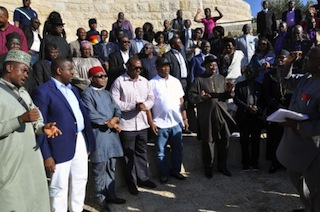 President Goodluck Jonathan will on Friday depart Lagos on a brief pilgrimage to Israel, his office said in a statement on Thursday.

The statement issued in Abuja by Dr Reuben Abati, the Special Adviser to the President on Media and Publicity, said that Jonathan would visit Christian Holy sites during the pilgrimage.

According to the statement, he will join other Nigerian pilgrims in a prayer session for the well-being and progress of the country at an Inter-Denominational Service in Jerusalem on Sunday.

The president, who will be accompanied by the Chaplain of the Presidential Villa, Venerable Obioma Onwuzurumba and his principal aides, is expected back in Abuja on Monday.

Before leaving for Israel, Jonathan will participate in the ground-breaking ceremony for the construction of the Seme-Krake Joint Border Control Post on Friday morning, the statement said.

“He will be joined at the event by President Boni Yayi of Benin Republic and officials of the Economic Community of West African States (ECOWAS).

“The Seme-Krake Joint Border Control Post is being constructed under the ECOWAS Transport Facilitation Programme which has the objective of boosting trade and economic relations among member countries,” it said.