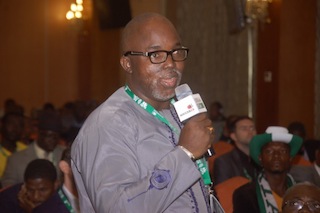 Nigeria is at risk of another FIFA ban after a court declared the elections that ushered in Amaju Pinnick as president of the Nigeria Football Federation (NFF) illegal.

World football governing body FIFA have warned that should anything hinder the newly-elected NFF executive committee led by Pinnick, the former Delta FA chairman, from operating, they will move for an automatic ban of Nigeria till the next FIFA congress in May.

On Thursday, Justice Ambrose Allagoa of the federal high court in central city of Jos ruled against the NFF elections in Warri of September 30 as well as the congress before it.

“I have set aside all the proceedings and decisions of the Warri extraordinary meeting of the 20th September and the elective congress of 30th September which were (in) direct contravention of the orders of this court as granted on the 19th September,” said the judge.

“Defendants in this matter have not filed any counter affidavits in this court to contest the facts. There is no motion nor Memorandum of Appearance. This is a court of record. On this note, the court has no option than to protect the integrity and sanctity of court. Court orders are not tea party. Nobody is above the law. Impunity must be stopped.”

A lawyer representing the NFF, Damon Danshe, said his clients will appeal this ruling.

“We shall consult with our clients, but certainly we shall go to the court of appeal as we are not satisfied with the decisions of the court in this matter,” he said.

Some supporters of Chris Giwa, who maintained he was elected NFF president on August 26, took the matter to court in contravention of FIFA statutes forbidding football issues to be deliberated in a civil court.

FIFA did not recognise the election of Giwa and ordered him to vacate the NFF office in Abuja.

In July, Nigeria was suspended briefly after another court in Jos sacked the NFF then led by Aminu Maigari and the country’s sports minister appointed a civil servant to run the federation.