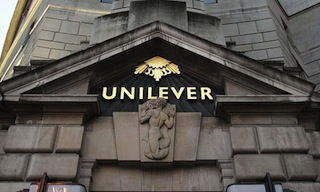 Dutch food and cosmetics giant Unilever on Thursday posted a third quarter drop in sales down 2.0 percent, blaming a slowdown in emerging markets, particularly in China.

Turnover dropped to 12.2 billion euros ($15.4 billion), which was also weighed down by a negative currency impact of 2.6 percent, the Rotterdam-based group said in a statement.

“In China, the impact of the sharp market slowdown has led to trade de-stocking across the distribution channels,” Unilever said, leading to a drop in underlying sales of around 20 percent.

China’s gross domestic product (GDP) expanded in the third quarter at its slowest pace since the depths of the global financial crisis, official data from Beijing showed on Tuesday.

The Asian giant’s economy — a key driver of global growth — is suffering from a deflating property bubble, a crackdown on corruption and weak demand from Europe, prompting authorities to introduce monetary easing measures.

In Europe, sales of one of Unilever’s top stars, ice cream, was affected by a wet summer but growth remained positive, especially in key markets like Turkey.

“Europe had a difficult quarter as we saw price deflation in many markets such as France, Germany and the United Kingdom,” Unilever added.

Conditions in North America however started to improve, showing 0.6 percent growth on the back of a sharpened manufacturing and distribution infrastructure and streamlining of Unilever’s portfolio.

Looking ahead, Polman said Unilever expected “markets to remain tough for at least the remainder of the year.”

“We expect trade de-stocking in China to be largely complete by the end of 2014,” Unilever added, saying “we are confident that we will achieve another year of profitable income growth ahead of our markets.”

Founded in 1930, Unilever is one of the world’s leading suppliers of consumer goods and owns a variety of brands such as Lipton Yellow Label tea, Magnum ice cream, Knorr, Omo washing powder, Vaseline and Dove.