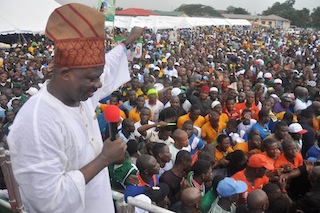 Amosun at the tour

Governor Ibikunle Amosun of Ogun state today got royal support from all the traditional rulers in Egbaland as the project assessment tour of local governments across the state which began about a month ago came to an end.

The traditional rulers, while taking turns to address the crowd explained why they support Amosun’s quest for another term of office.

Similar pledges of support happened when the governor visited other districts of the state where the monarchs led by their Paramount rulers endorsed the governor for a second term given his developmental projects across the state.

The Egba monarchs, who described Amosun as “an unequalled achiever” in the history of the state, said Amosun deserved to be re-elected for another term of four years in order to guarantee continuity of the urban renewal as well as the infrastructural upliftment across the state.

The event, was held at the Oba Odeleye Park, Sokori area in Abeokuta North local government area of the state.

The Alake of Egbaland, Oba (Dr) Michael Aremu Adedotun Gbadebo, Okukenu IV, said the Amosun tenure was a fulfilment of the Ifa oracle’s prediction on Egbaland.

According to him, the dieties of the land had foretold that Abeokuta and the entire Ogun state would only record transformation in the tenure of the 10th Alake which happens to coincide with Amosun’s tenure. 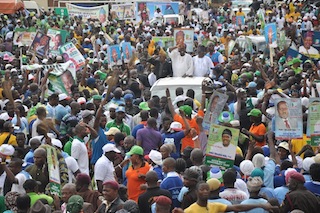 The monarch said, though, traditional rulers don’t play partisan politics, the developmental projects witnessed within the past three years of Amosun’s tenure have made it expedient for them to identify with good governance and endorse Amosun for another term of office.

Oba Gbadebo further declared that what Amosun has achieved within the past three years would ordinarily take another administration a period of 20 years to achieve.

In his goodwill message, the Osile of Oke–On Egbaland, Oba (Dr) Adedapo Tejuoso said he was fascinated by the achievements of Amosun, calling on the people of the state to ensure his re-election to guarantee the ongoing infrastructural renewal does not stop.

The trio of Agura of Gbagura, Oba Halidu Laloko, the Onisaga of Isaga, Oba J.O. Tella and Omola of Imala, Oba Moses Adelani Olabode stated that it would be a big disgrace to the people of the state, should the governor fail to be re-elected.

They emphasised that projects done halfway are never done well, bearing in mind that successive governments do abandon ongoing projects of their predecessors.

In his own message, the Olowu of Owu Kingdom, Oba Adegboyega Dosumu described Amosun’s assessment tour of the area as home coming, stressing that the entire sons and daughters of Owu were proud of the governor’s performance within the past three years.

The monarch further explained that he has met with Awujale and Paramount ruler of Ijebuland, Oba (Dr.) Sikiru Kayode Adetona, Ogbagba II, the Olu of Ilaro and Paramount ruler of Yewaland, Oba Kehinde Olugbenle as well as other traditional rulers across the state on the need to mobilise their subjects to vote for Amosun come February 2015 governorship election in the state.

Also speaking at the event, the Chairman of the Association of Ogun State Indigenes of Entertainment Industry, Prince Dele Odule in his message explained that his association decided to support Amosun for another term, because they have seen that the governor combined the fear of God to governance in the state.

Odule said his association ordinarily, does not support politicians, but stressed that Amosun’s keeping to his electioneering campaign promises necessitated their support for his re-election bid.

Responding to the encomiums, the elated governor promised that he would never disappoint all sons and daughters of the state who were encouraging him to do more.

Amosun thanked all those who have supported him and his team from the first day of the tour till the last day, expressing gratitude to God for his mercies and guidance throughout the almost a month tour.

“I want to thank our landlords, the civil servants from the Head of Service down to the lower cadres, the security personnel, the gentlemen of the press, politicians and all sons and daughters of the state who have been solidly behind us with vigour, rigour and prayers, we promise not to let you down. Together, we will get there, Ogun State of our forefathers will by God’s grace become a reality,” the governor said.