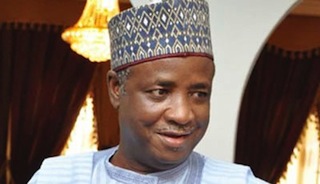 This was contained in a statement signed by the Special Assistant to Wamakko on Information, Communications and Technology ( ICT), Alhaji Aminu Abdullah, in Sokoto on Friday.

The statement said that Wamakko’s visit was sequel to an invitation by the Nigerien President, Alhaji Mahamadou Issoufou.

“The governor was received at the Aeroport International Diori Hamani, Niamey, by some top Nigerian Embassy officials and Nigeria’s Ambassador to Niger.

“The governor was conveyed straight to the Presidential Palace, Niamey, where he met President Mahamadou Issoufou and deliberated on a number of issues ranging from security, business ties, agriculture and health”.

Sokoto State borders Dosso, Tahoua and Maradi states in Niger Republic and there have been decades of religious, socio-cultural and economic ties between them.

The statement said that Sokoto State Government had done a lot in the area of roads construction linking the state and its neighbours in Niger Republic.

“Also, the duo discussed avenues of bilateral interests in railway extension to Illela International Market in Sokoto from Niger Republic.”

The visit is expected to prepare for a second round of meeting between the Nigerien President and Wamakko soon.

The governor’s entourage include the Chairman of the All Progressives Congress ( APC) in the state, Alhaji Bala Hassan and the Secretary to the State Government, Alhaji Sahabi Gada.

Others are the commissioners of works, education and environment, Alhaji Umaru Nagwari, Alhaji Bello Danchadi and Dr Jabbi Kilgori, respectively.