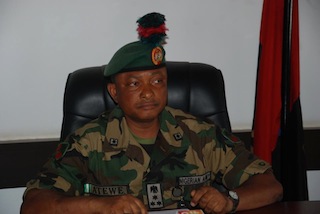 The Assistant Inspector-General of Police (AIG) in charge of Zone 5, Benin, Musa Daura, has pledged the support of the Nigeria Police in the fight against oil theft in the Niger Delta.

Daura gave the pledge on Saturday during a familiarisation visit to the Commander of the Joint Task Force (JTF), Operation Pulo Shield, Maj.-Gen. Emmanuel Atewe, at the headquarters of the task force in Yenagoa.

He said he was at the JTF headquarters to dialogue with the JTF commander on the activities of the group.

He commended the JTF for what he described as “total war against illegality in the Niger Delta”.

The AIG condemned illegal oil bunkering which according to him, is hazardous to the well being of the people of the Niger Delta.

“Apart from the economic loss to the nation through the act, the continuous rupturing and breaking of the oil pipeline cause a lot of health hazard to the people of the region.

“It pollutes the environment which always results to outbreak of epidemic in the region.”

He called stakeholders in the region to join hands in the fight against oil-related crimes and create a conducive atmosphere for oil companies to conduct their legitimate businesses.

Atewe thanked the AIG for the visit, saying that the gesture would boost the morale of troops under his command.

He said the JTF had embarked on a zero tolerance campaign toward total eradication of illegal oil bunkering and oil theft in the Niger Delta.

“We must continue to build synergy in this fight against economic saboteurs and enemies of our environment and country,” he said.