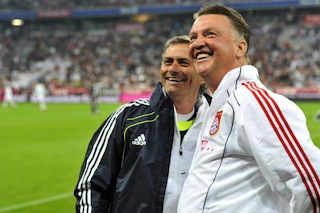 Jose Mourinho and Louis van Gaal insist their friendship will survive whatever happens when Chelsea look to cement their position on top of the Premier League with a statement victory at Manchester United on Sunday.

Mourinho has never hidden his distain for some of his managerial rivals, with Arsenal’s Arsene Wenger and Aston Villa’s Paul Lambert crossing swords with the Chelsea boss already this season, and the prospect of a crucial clash with a team capable of ending his side’s unbeaten start would usually bring out the antagonist in the Portuguese coach.

Yet there should be a refreshing lack of animosity on the sidelines at Old Trafford this weekend, however heated the action becomes on the pitch, because Mourinho and United manager van Gaal have a bond that dates back 17 years to the day their paths first crossed at Barcelona.

Mourinho, then labouring in anonymity as a translator and assistant to Barcelona manager Bobby Robson, was kept on by van Gaal when he took over at the Nou Camp and earned the trust of his new boss to such an extent that he was allowed to take training sessions and give team-talks.

Van Gaal saw a kindred spirit in Mourinho, who like the Dutchman is an obsessive workaholic who had trained as a PE teacher, and the two men lived only 15 metres from each other in an apartment block, often meeting around their dining tables to talk football.

The partnership lasted until Mourinho left to start his managerial career with Benfica in 2000 and the ties between the pair remain strong, with Mourinho paying tribute to his mentor when asked about van Gaal’s influence on him.

“As a young coach to be working with Louis at a club like Barcelona was very important,” Mourinho said.

“Everybody knows the respect I have for him. I never hide the respect, the relationship and the fact he was an important influence in my career.

“He knows what I feel about him. The world knows, because I never hide. What can I add?”

Van Gaal continued the mutual appreciation society, jumping to Mourinho’s defence when quizzed about his spikey personality and penchant for acerbic outbursts.

“He’s such a wonderful coach and to see that he’s been a champion in different countries is fantastic,” van Gaal said.

“He is a very modest and emotional human being, and I like that.

“He’s very special but he is very special for me because I’ve worked with him and we’ve continued our relationship, which in the football world is not always normal. That’s nice.”

Despite boasting two of the sport’s most enviable CVs, they have met only once before as managers in the 2010 Champions League final, with Mourinho’s Inter Milan beating van Gaal’s Bayern Munich 2-0.

And, while nothing is likely to shake their friendship, van Gaal would dearly love to avenge that result and show his old pupil that the teacher is still a force to be reckoned himself.

Defeating Chelsea would be a significant moment for United, who are 10 points off the top after a spluttering start as van Gaal overhauls an unbalanced squad and tries to get the team to buy into his philosophy.

Likewise, Mourinho would relish the opportunity to send a message that Chelsea are the team to beat in the title race, even if it means upsetting his old pal.

“Please, he’s going to be my opponent, so don’t make me speak for half an hour good about him,” Mourinho said.

“It’s not the moment for that. I don’t play against Louis. Chelsea plays against Man United.”

Both van Gaal and Mourinho will be tested by key absences, with United striker Wayne Rooney suspended, while Chelsea duo Loic Remy and Cesar Azpilicueta are injured and banned respectively and leading scorer Diego Costa is struggling to recover after a hamstring injury and a virus.