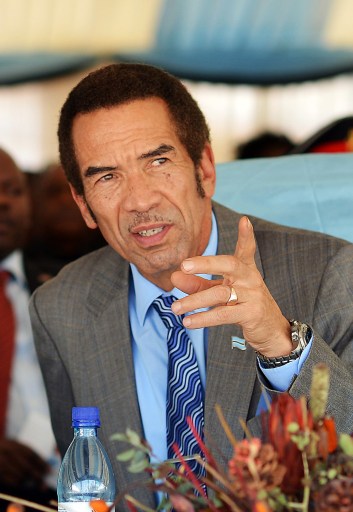 Botswana’s ruling party was Saturday leading in local constituencies as results trickled in from a general election held the previous day, but opposition parties made a strong showing in the capital, the electoral commission said.

There had been delays in the counting of parliamentary ballots and no results had been received so far, a spokesman for the Independent Electoral Commission, Osupile Maroba, told AFP.

“We are still on track for the release of final results by the end of the day (Saturday),” said Maroba.

The parliamentary results will determine who will be president for the next five years. The incumbent leader, Ian Khama of the Botswana Democratic Party (BDP), is expected to win a second term.

The landlocked, diamond-rich southern African country of two million people is seen as one of the continent’s strongest democracies, and electoral authorities said the Friday vote saw a high turnout of the 800,000 registered voters.

Early results, based on IEC-verified counts from 200 of the 490 local council voting districts, showed the ruling BDP won less than half the 13 wards counted so far in the capital Gaborone.

That appeared to be a sharp reversal for the BDP, which in the last election in 2009 won 22 of Gaborone’s 30 wards.

The BDP has ruled Botswana since independence from Britain in 1966, but suffered a split in the party in 2010.

“These polls are important, we are tired of having just one party take it all,” said Paul Metsing, a UDC supporter.

“The UDC has so far done well so far, given its lack of experience in contesting the elections,” he said.

At counting stations, sealed metal boxes from polling station were opened in front of party representatives and physically counted.

Observer missions from the regional Southern African Development Community (SADC), the Commonwealth and the European Union were expected to report officially on the vote later.

“So far things have gone well. We are impressed with the progress, especially the conduct of voters at polling stations,” said a member of the SADC mission, speaking on condition of anonymity.

Khama, the 61-year-old incumbent president, is a son of the country’s first president, Seretse Khama. He is also a traditional chief of the Bangwato clan and could count on strong rural support in his run for a second mandate.

But he faced a challenge in urban areas, where opposition parties have made inroads since the formation of a breakaway party, the Botswana Movement for Democracy (BMD), in 2010. The BMD is now part of the UDC coalition.

Many young voters said they wanted change because unemployment was high and living standards low.

“I think the government is taking care of us but it’s not enough. We need jobs. The mines are not hiring us anymore. Things are very tough for young people here.”

With the global financial crisis leading to a drop in diamond revenues, Khama’s government halted planned investment, leading to growing unemployment and slow progress in diversifying the economy.