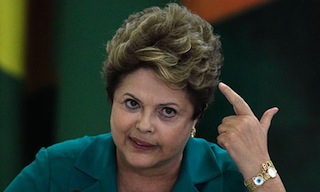 Brazil’s presidential candidates clashed over corruption allegations in Friday’s final debate, as incumbent Dilma Rousseff rejected a report that she knew about a kickback scheme at state oil giant Petrobras.

The last debate before Sunday’s run-off election was heated from the start as the report in conservative newsweekly Veja dominated opening exchanges before the candidates moved on to the economy and political reform.

Center-right challenger Aecio Neves demanded to know what his leftist rival knew about Veja’s claim that she and her predecessor Luiz Inacio Lula da Silva were personally aware of embezzlement within Petrobras, whose board Rousseff once chaired.

Rousseff insisted she was not and repeated a vow made prior to the debate that she planned to sue Veja for “slander and libel.”

She chided Neves for repeating the claim and insisted voters could see through a Veja attempt to influence the poll outcome.

“Veja magazine has presented no proof — this magazine has a habit of trying to pull off an electoral coup right at the end of campaigning,” Rousseff stormed as both candidates prepared to field questions from undecided voters from around the country.

Neves said the ruling Workers’ Party (PT) had a record of corruption dating back to the “mensalao” Congressional vote-buying scandal during Lula’s 2003-2011 administration, in which lawmakers received cash to vote for PT legislation.

An investigation did not censure Lula but derailed some political careers, while a close Lula advisor was jailed.

But Rousseff hit back, accusing Neves of “wanting to take Brazil backwards” and reminding him there had been a scandal over vote buying in the state of Minas Gerais where he served as governor and where 10 accused were never tried.

And Rousseff went for the jugular in adding that one of the best-known of that group “is the coordinator of your campaign in Minas Gerais.”

Neves retorted: “The best measure against corruption would be to take the PT out of power.”

After tackling the Veja fallout, Rousseff and Neves moved onto Brazil’s current economic recession and an inflation rate which has pushed through the government’s own ceiling target of 6.5 percent.

Rousseff, who latest opinion polls going into the weekend gave a lead of between six and eight percent, in her defense pointed to record-low joblessness and rises in the minimum wage.

Both candidates agreed education required huge investment but disagreed on each other’s record on improving schools.

Neves complained that the PT had not sufficiently addressed poor infrastructure and public services, issues that brought more than a million protesters onto the streets a year ago, saying millions of households lacked proper sanitation.

Rousseff concluded by saying nothing would deflect her in her aim of building a better Brazil for all, while Neves insisted he was the candidate of much-needed change.