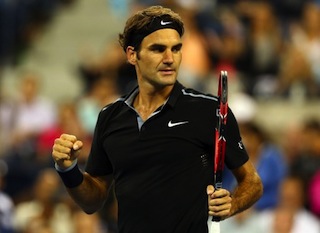 Roger Federer defied a 33-ace onslaught from Ivo Karlovic to reach his ninth straight final at the Swiss Indoors on Saturday with a 7-6 (7/3), 3-6, 6-3 victory.

The five-time hometown champion is now into his 11th career final at the St Jakobshalle, the event where he got his start in the sport two decades ago as a ballboy.

But it took a mighty effort from the 33-year-old world number two who achieved the break he needed in the third game of the final set.

Federer landed a return at the Croatian giant’s feet which Karlovic netted to hand over three break points.

Karlovic then double-faulted as Federer broke for 2-1 to wild screams from a partisan crowd in excess of 9,000.

The end eventually came when the top seed leapt for an overhead smash for three match points.

One was all he needed, with a volley winner sealing a Sunday final with Belgian outsider David Goffin.

The 28th-ranked Goffin ended the dream run of teenager Borna Coric, the conqueror of Rafael Nadal, 6-4, 3-6, 6-3 in his semi-final.

Croatian Coric, 17, and ranked 124th, was brought down to earth less than 24 hours after he won the match of his career, defeating 14-time major winner Nadal in the quarter-finals.

Goffin, a low-key character at the best of times whose baby-face disguises a killer instinct on court, credited his steady, calm demeanour with getting him through against Coric.

“I’m pretty calm on and off the court,” said the Belgian whose Grand Slam main draw debut at Roland Garros in 2012 was ended by Federer in the fourth round.

“I think my personality helps me manage on the big points. I’m really happy to have won and reached the final,” said the seventh seed who needed four match points to close out Coric.

“It’s never easy to finish a match. I was nervous and I’m pleased that I won.”

Goffin, who has exploded into form since Wimbledon with a 43-2 record, has this season won ATP titles at Kitzbuhel and Metz as well as four trophies on the lower-level Challenger circuit.

“It’s a great period for me, I’ve been playing better and better in each match, I have the confidence now and that is helping me. I’m able to just keep winning right now.”

The Belgian won the first set Saturday but found himself level-pegging in the second after Coric struck back with his fifth and sixth aces to earn the second set.

In the third, Goffin broke for 3-1 and eventually earned three match points from a Coric error.

The Belgian double-faulted on one of his winning opportunities but secured the win on his fourth match point from a Coric return over the baseline.

Goffin, 23, earned the first top 10 win of his career in the quarter-finals as he defeated number nine Milos Raonic.