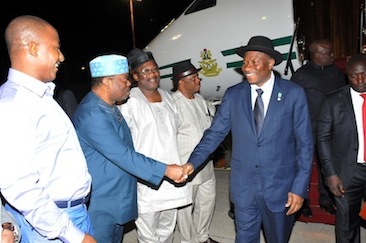 President Goodluck Jonathan arrived in Jerusalem on Saturday for a two-day pilgrimage to Israel.

According to the president’s itinerary, he will observe the Sabbath Day on Saturday at the Wailing Wall, where he will pray privately before going to Mount Tabor and Mount Carmel.

Jonathan will also visit some other Christian holy sites during the pilgrimage.

During the pilgrimage, he will pray for Nigeria at an Interdenominational Church Service with the theme: “A day with Jesus for Nigeria in Israel”.

The progamme of events indicates that other Nigerian Pilgrims will join the president during the service to pray for the well being and progress of the country.

NAN recalls that Jonathan is performing pilgrimage for the second time since he was elected president in 2011.

Others that were at the airport included Gov. Willie Obiano of Anambra, Mr John-Kennedy Opara, Executive Secretary, Nigeria Christian Pilgrims Commission and Brig.- Gen. Jones Arogbofa, the Chief of Staff.

The president is accompanied to the pilgrimage by Ven. Obioma Onwuzurumba, Chaplain of the Presidential Villa, Bishop David Oyedepo of Living Faith Church Worldwide and Sen. Smart Adeyemi, Chairman, Senate Committee on FCT.

Members of the Federal Government delegation in the pilgrimage include the Most Rev. Nicholas Okoh, Primate Church of Nigeria (Anglican Communion) and Pastor Ayo Oritsejafor, President, Christian Association of Nigeria (CAN).

Other delegates are Gov. Gabriel Suswam of Benue and Gov. Jonah Jang of Plateau.