Luis Suarez to start for Barca in El Clasico 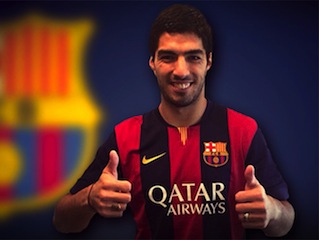 Barcelona’s record signing Luis Suarez makes his debut against Real Madrid on Saturday after being named in the starting line-up for the biggest game in club football.

Suarez — who is making his return to competitive football after serving a four month ban for biting Italian defender Giorgio Chiellini — is part of an all-star South American front three for the La Liga leaders also including Lionel Messi and Neymar.

Messi is looking to make history at the Bernabeu as he is just one goal short of matching Telmo Zarra’s record of 251 La Liga goals.

Xavi is also surprisingly selected ahead of Croatian Ivan Rakitic in midfield, whilst coach Luis Enrique has also preferred the extra height of Frenchman Jeremy Mathieu to Jordi Alba at left-back.

There were no surprises in the Madrid team as Cristiano Ronaldo spearheads a Real attack missing the injured Gareth Bale.

Spanish international Isco continues to deputise for the Welshman as Carlo Ancelotti makes just two changes from the side that beat Liverpool 3-0 on Wednesday with the fit again Sergio Ramos and Dani Carvajal replacing Raphael Varane and Alvaro Arbeloa in defence.