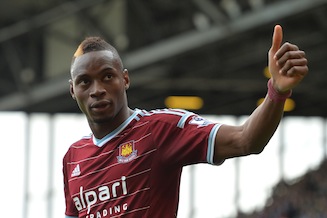 Diafra Sakho struck for a sixth successive Premier League game to secure West Ham’s shock 2-1 victory over Manchester City as the champions missed out on the chance to increase the pressure on leaders Chelsea on Saturday.

Senegal striker Sakho, signed during the close season for £4.5 million ($7.2 million) from Metz, headed West Ham’s crucial second goal in the 75th minute after Morgan Amalfitano had given the home side a first-half lead at Upton Park.

City were desperate to close the five-point gap on Chelsea, 24 hours before Jose Mourinho’s side face Manchester United at Old Trafford.

But while David Silva halved the deficit in the 77th minute, Manuel Pellegrini’s men were unable to conjure an equaliser against a West Ham side who surprisingly cemented their position in the top four.

City were also anxious to move on from yet another midweek Champions League disappointment following the 2-2 draw at CSKA Moscow.

Pellegrini admitted his side paid the price for failing to close out that game after taking a two-goal half-time lead.

With the future of their European campaign now in doubt, Pellegrini was looking for an immediate response as they resumed their defence of their Premier League title.

The meetings between these two sides last season were an embarrassing mismatch with City winning each of the four meetings including the two-legged League Cup semi-final, running up an aggregate score of 14-1.

But West Ham are a different proposition this season following the arrival of Enner Valencia, Sakho, Amalfitano and Alex Song.

City started brightly, with Sergio Aguero immediately punching a hole in the home defence with a powerful run from halfway before seeing a deflected shot scrambled away by Hammers keeper Adrian.

Silva then sent a free-kick on to the roof of the net and Vincent Kompany headed over as the visitors threatened to overrun Sam Allardyce’s side.

But for all the early pressure they exerted, City’s play lacked fluency and West Ham gained a foothold in the game when they were able to service Sakho and Valencia, who showed they had the ability to stretch the visiting back-line.

The combination of the front pair almost brought an opening goal when Sakho’s headed flick almost released his forward partner behind Kompany.

That proved to be only a temporary let-off for City, who were undone in the 22nd minute when Song’s excellent through ball released Valencia whose low cross was turned home by Amalfitano from close range.

It was clear City were rattled and they diminished as an attacking force the longer the first half went on while West Ham grew in confidence with Stewart Downing coming close to heading a second.

Downing was guilty of spurning an even better opportunity early in the second half when he met Song’s cross with a volley from 10 yards out, only to send his effort wide.

There was a growing sense that those misses could prove costly as City injected more urgency into their play.

Aguero somehow directed a first-time effort against the bar from Jesus Navas’s cross and Adrian produced an excellent save to deny Yaya Toure’s follow-up.

Toure struck the bar midway through the half after being set up by Silva.

But West Ham’s attacking threat was always apparent and after sending a clipped, 20-yard effort narrowly over the bar, Sakho gave the home side a two-goal cushion when he rose to head Aaron Cresswell’s cross past Joe Hart in the 75th minute.

City’s response was impressive with Silva clawing one back within two minutes after cutting in from the right and curling a well-placed left foot shot beyond Adrian.

But they were unable to find their way past the keeper a second time as the points slipped away.