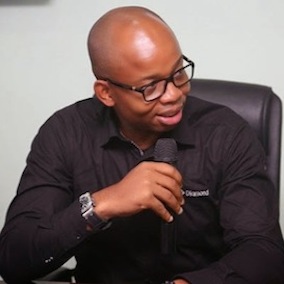 The Board of Directors of Diamond Bank has announced the resignation of Dr Alex Otti effective October 30th 2014 and the appointment of Uzoma Dozie as its new Group Managing Director effective November 1st 2014.

The bank’s Board approved the appointment of Uzoma Dozie as Group Managing Director/CEO designate subject to CBN approval.

He is currently the driving force behind the bank’s market leadership in the Nigerian Retail Banking space, championing major innovations in e-banking (Diamond Mobile app), banking the un-banked (Diamond Yello and BETA proposition) and masterminding the strategy for promoting a seamless transition to a cashless economy.

Uzoma Dozie graduated in 1991 with a Bachelor of Science degree in Chemistry from the University of Reading, Berkshire England. He obtained a Master of Science degree in Chemical Research from University College, London in 1992. As he progressed in his professional career, he enrolled at the Imperial College Management School, London, where he obtained an MBA with specialisation in Finance (MBA finance) in 1998.

In 2004, Uzoma spent time with the Amalgamated Bank of South Africa (ABSA) where he was exposed to the rudiments of Retail Banking and Wealth Management, Organizational Behaviour and Human Resources Management. Upon his return, he set up the Personal Banking Group with focus on offering propositions to the Affluent and Mass Market customer segments (Retail Business). Uzoma developed various partnerships with business franchises for retail business growth, created market awareness and developed various retail propositions to drive liability generation.

Following his success in Personal Banking, Uzoma was appointed an Executive Director in 2006. In 2008, he was reassigned the Corporate Banking portfolio where he was responsible for managing and developing relationships in Oil and Gas, Power, Infrastructure, Construction, General Commerce and Manufacturing businesses. In 2010, Uzoma’s responsibilities were expanded to include acting as the Bank’s Chief Financial Officer (CFO) following the retirement of the erstwhile CFO. As the acting CFO, Uzoma oversaw the Bank’s corporate strategy, Financial Management, Business Transformation and Investor Relations.

In February 2011, following the appointment of a new CFO, Uzoma’s responsibility was modified to cover Corporate Banking and all Businesses in Lagos and Western region. While in charge of Corporate Banking and Regional Business, Lagos, Uzoma developed and nurtured business clienteles in the middle market and national corporate segments, in addition to his corporate banking functions.

In January 2014, he was re-assigned to the Retail Banking Directorate and appointed Deputy Managing Director in April 2014.

The board believes that Uzoma’s wealth of experience, remarkable leadership skills and strong mentorship capabilities will serve to help the Bank achieve its short and long term goals especially in the highly competitive Banking industry in Nigeria.