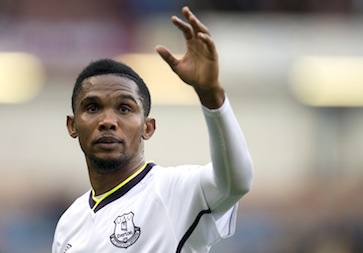 Newcastle United’s recent upturn in fortunes continued after coming from a goal down to defeat Tottenham Hotspur at White Hart Lane while Samuel Eto’o scored twice for Everton in the 3-1 win at Burnley elsewhere in the Premier League on Sunday.

Second half goals from Nigerian international Sammy Ameobi and Ayoze Perez cancelled out Emmanuel Adebayor’s first half goal for Spurs as Newcastle United won consecutive league games for the first time this year.

The win further eased the pressure on Newcastle manager Alan Pardew, who has endured vocal calls for his sacking from fans to lead the Magpies on a run of just one defeat in the last five matches.

For some time though it seemed the draw at Swansea and win at home to Leicester were false dawns for Newcastle after Adebayor diverted a chipped pass from Ryan Mason to put the Lilywhites in front after 18 minutes.

Spurs were let down by the final touch for the rest for the half as the home side went into the break leading by the solitary goal from their Togolese striker. 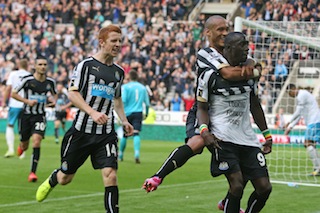 Pardew introduced Remy Cabella and Ameobi for the second half and the substitutions proved the nadir for Newcastle’s comeback, with Ameobi drawing the visitors back on level terms seconds into the second half with his first ever Premier League goal.

Spurs attacked afterwards, looking to regain the lead but it was Newcastle that got a second goal instead when Perez headed in a Cabella cross just before the hour mark.

Cabella squandered a golden chance for Newcastle moments later, sending an effort into the sidenetting when a number of his teammates were awaiting a pass in the Spurs area.

Spurs substitute Harry Kane had an effort easily saved by goalkeeper Tim Krul midway through the second half as Newcastle held on for a morale boosting win, only its seventh this year.

The result moves Newcastle out of the relegation zone and into 14th place on the table with 10 points, while Spurs is now just a point ahead of the Magpies in 11th place.

Meanwhile at Turf Moor, a sublime team move from Everton ended with a cross from Leighton Baines being headed in by Eto’o to put the Toffees in front after just three minutes.

Burnley however capitalised on a Romelu Lukaku error to equalise after 20 minutes, when the Belgian striker’s pass was intercepted by Boyd, who set up Danny Ings to round Tim Howard and finish into an empty goal.

Lukaku made up for his error by restoring Everton’s lead just before the half-hour mark, scoring at the second try after his initial effort was blocked but fell back to him.

Eto’o had a tame effort saved while Seamus Coleman’s freekick was pushed away by the Burnley goalkeeper within a minute after the hour mark as Everton pressed for another goal.

After a long spell of possession, Everton finally got a third goal through Eto’o who received a pass from substitute Steven Pienaar before lashing in a curling effort from 25 yards.

The win puts Everton in ninth place with 12 points while Burnley is second from bottom with four points, ahead of Queens Park Rangers on goal difference, and remain the only team yet to register a win in the Premier League this season.