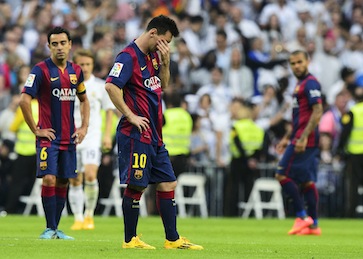 Real Madrid took the spoils in the first El Clasico of the season as Luis Suarez’s Barcelona debut ended in a 3-1 defeat.

A ninth consecutive win in all competitions takes Madrid to within a point of Barca at the top of La Liga.

Here, AFP sports looks at what else can be gleaned from the victory for Carlo Ancelotti’s men

– More to come from Suarez

The Uruguayan was starting his first competitive match in four months since biting Giorgio Chiellini at the World Cup and made an instant impact as he teed up Neymar for the opening goal.

There were a few more flashes of brilliance as Lionel Messi should have tucked away another fine cross to make it 2-0, whilst he turned the Real defence on numerous occasions after the break without finding the final finish or pass.

All positive signs for Luis Enrique’s men on what was ultimately a disappointing day.

A muscle injury robbed Gareth Bale of taking part in the biggest week of Madrid’s season to date, but they haven’t missed him whilst firing six goals past Barca and Liverpool in the past four days.

Bale’s absence allowed Ancelotti to use the 4-4-2 system that guided Los Blancos to victory against Barca in the Copa del Rey final in April with Isco’s work rate and guile in midfield more than compensating for the lack of Bale’s pace on the counter-attack.

The Brazilian registered his 11th goal this season in as many games with his only clear chance in the match as he ghosted inside Dani Carvajal and Pepe to slot into the far corner.

The game was decided by two goals in the second-half which came from corners as Barca continued to suffer from the defensive problems that dogged their trophyless campaign last season.

Pepe powered Madrid in front as, just as in their only previous defeat this season away to Paris Saint-Germain, the Catalans were caught napping at a set-piece.

Then, in their haste to equalise, Barca were caught on the counter-attack from a corner of their own as a mix up between Andres Iniesta and Javier Mascherano prompted a lightning quick move finished off by Karim Benzema.

– A big night for Casillas

Ever since playing his role in Spain’s disastrous World Cup campaign, Casillas has come under fire to justify his place in the team from the Madrid fans amongst others.

However, he rewarded Ancelotti’s faith in him with two fine stops at crucial points in the match as he spread himself to deny Messi before flying to his right to prevent Jeremy Mathieu a stunning equaliser just after Madrid had gone in front.