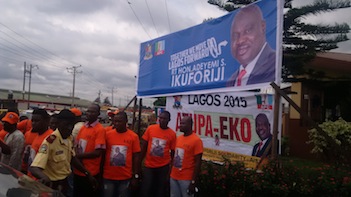 Lagos State House of Assembly Speaker, Adeyemi Ikuforiji has formally declared his intentions to contest for the position of governor on the platform of the All Progressives Congress (APC). At an elaborate event held at LTV 8, Ikeja he promised to make Lagos a global destination. Here is an excerpt of his speech.

“A few weeks ago, I intimated my colleagues, members and staff of the Lagos State House of Assembly about my ambition to seek the ticket of our party, the All Progressives Congress (APC)forthegovernorship election of
Lagos State.

By the grace of God, the wishes of the good people of Lagos State and the support of the Honourable Members, I am the longest-serving Speaker in Nigeria’s history. However, in revealing my ambition to the members of the House and the staff,I emphasized that though I had prayed to God about the decision and consulted widely, the time was not ripe for my formal declaration. Now the time has come!

The time has come for us to dwell on the dreams and aspirations that unite us as Lagosians and not the issues that separate us as individuals.

My dear Lagosians, I believe the time has come for the consolidation of the gains of the tradition of good governance which Lagos State has exemplified since the beginning of the Second Republic; the time has come to rearticulate the vision of the founding fathers of Lagos State and reenergise the people of this great city-state, which even by the 19th century had been declared “The Queen of West African Settlements” and the time has come to build on the foundations laid in the golden years of democratic Lagos under the leadership of Asiwaju Bola Ahmed Tinubu and his successor, Governor Babatunde Raji Fashola, SAN, and make Lagos not just the Queen of all African cities and the nerve centre of the economic and social processes in the continent, but also a truly global city.

My core vision is to consolidate and enlarge the enviable legacy of good governance, sterling leadership and unmatched excellence for which Lagos State has come to be known; and to ensure that the greatest good generated in, and attracted globally by Lagos is shareable among all Lagosians.

Under my governorship, Lagos will truly become a global city, one that all Lagosians will be proud of! I will work hard to make Lagos the African Alpha City, one that will link the African economy to the world economy, thus, Lagos will constitute the heartbeat of the continent in the 21st Century. I believe that our state has all that it takes to seize this role. And I am convinced that we can make it happen under my leadership.

As a technocrat and a widely travelled politician, I will contribute my quota to the charting of a new trajectory for our political party by ensuring that our politics is devoid of rancor and favoritism. I will ensure that even to the most politically aloof Lagosian, politics will be attractive and no longer perceived as a dirty game characterized by nepotism. Under my watch, our political culture will improve, I am an individual awakened to the desire to make Lagos a destination city; our state must take its pride of place among megacities; I am called to make that happen.

I am here to consolidate the work that was begun by the first civilian Governor of Lagos State, Alhaji Lateef Jakande, our Governor Emeritus, Asiwaju Bola Tinubu and the present Governor, Mr. Babatunde Fashola SAN. My government will combine the populist approach of Jakande, the financial ingenuity of Tinubu and the vigor of Fashola to initiate and implement trailblazing policies and projects that will make our state one of the most liveable places in the world.

Infact, within the first 18 months of my administration, our hospitals will be upgraded to world class standard and government officials including myself will be mandated to undergo their medical check-up in our facilities instead of going abroad. Our schools will be restored to their former glory; government officials will be able to send their children to public schools; I will not rest until the Lagos State University becomes one of the top 500 universities in the world.

I am in this race to make a difference; my conscience tells me this is the best time to do the will of God for Lagosians; I am conscious of the huge responsibility that goes with the office I seek.

Again, I believe I am well placed to lead this new phase in the history of our great state. I have the needed training, the required local and global experience-the vision and concrete programmes,the leadership qualities as displayed in the last nine years in managing the affairs of the most visible and most dynamic state legislature in Nigeria. I also have the sagacity and cosmopolitan outlook that is necessary for the governorship of Lagos State.

From the beginning of my political career as a ward official for the Unity Party of Nigeria (UPN) through my years in the Social Democratic Party(SDP), to the period when I joined the Alliance for Democracy (AD) – which became the Action Congress (AC) and later Action Congress of Nigeria (ACN) – and eventually merged with others to form the All Progressives Congress(APC),my commitment to progressive politics has been unwavering and steadfast.

Dear Lagosians, my 10-point Cardinal Programme connects all the critical areas of the political, economic and social lives of Lagos State and provides a synergy between, not only all the arms of government, but also all the different sectors of Lagos State’s economy, politics, culture and social life.

In the course of this speech I will highlight the most critical dimensions of the all-encompassing 10- Point-Cardinal Programme,produced after many months of handwork, research, deliberations, consultation and exchange of ideas with some of the finest brains that our country can boast of.

In the area of Job creation and poverty alleviation, full and gainful employment will be approached as an indispensable tool of ensuring good life for Lagosians. Towards this end, we will establish a Youth Enterprise Initiative with the aim of expanding the skill base of young people; we will create an unemployment portal for the state that will allow for proper planning and mobilization of resources an opportunities for the unemployed; we will create a women-focused and gender-sensitive government that will end the perennial neglect of this important demography and turn women and women issues into top priority, especially in terms of employment opportunities; and establish an all-year state-wide youth training programme, as a form of social engineering, which will serve to rehabilitate and re-integrate street urchins and area boys into the society.

We will emphasise a knowledge-based economy and entrepreneurship. In doing this, we will consolidate and expand the Internally Generated Revenue (IGR) and the resource-base of the state. We will also encourage and
promote local industries to stimulate growth, drive innovation and create employment through the creation of funding and mentoring schemes by adopting the right policy and political framework.

We will work with and provide tax incentives for local and global companies that will generate employment for Lagosians; we will create a Department of Diaspora Relations to work with Lagosians in the Diaspora in order to find ways of engaging their skills to encourage massive inflow of investment in the state; provide substantial funding for entrepreneurial education and skill acquisition by young people; invest massively in agriculture through public and, private partnerships and joint ventures with neighbouring states to ensure that food is available and affordable for Lagosians;and we will elevate the Lagos Annual Trade Fair to globalstandards.

We recognise that energy is critical for powering the economic and social life of a global city such as Lagos. Therefore, we will undertake the identification, through precise and up-to-date data,of the energy needs of Lagos, design measures and work with state and private agencies to meet these needs; and also ensure increased production of Independent Power Projects below 100MW to utilize the state’s hydro power potential, given that around 40 per cent of Lagos State is made up of water. The energy sector is of strategic importance to socio-economic growth. It has a crucial role to play in the development of Lagos State, particularly in relation to factors such as security, employment, poverty alleviation and wealth creation.

My dear Lagosians and fellow party members, all of these cannot happen without your support. What I offer is a solid plan backed by unflinching commitment to the greater good of Lagos State and all Lagosians. The possibilities of this great dream of a global city rest on your support.I believe that with your support, we can take Lagos State to greater heights.

I offer myself as a candidate with a clear vision of a greater Lagos and a commitment to leading the State on a new journey, which will consolidate the gains of the past and chart a new vision for the future.

I trust that you will join me in this effort. I count on your support; and I thank you for your presence here and your attention.