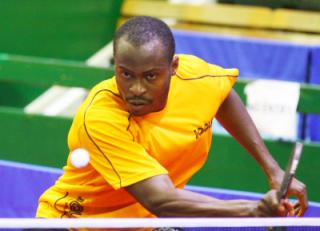 Although Aruna Quadri is the least seeded player in his group but with the goal of reaching the quarter-finals, Nigeria’s Quadri progressed to the round of the last eight at the Liebherr 2014 Men’s World Cup in Düsseldorf against all expectations.

A quite remarkable performance which exceeds those of all others from the African continent since the days of his compatriot Atanda Musa. He reached the quarter-finals under a different system of play in 1984 in the Malaysian capital city of Kuala Lumpur.

“My Time Out at 11-10 in the third game earned me the win; if I had lost that game I would have lost the match”, said Quadri. “I felt good and played courageously; I was focused and had confidence.

“I must confess it was not an easy match for me because from the start I made a lot of silly mistakes which wanted to repeat itself in the second set, but I was lucky to have escaped. “Throughout the match I was a bit nervous because I knew that I had to continue to slow down the pace of the game.

“The time out I took in the fourth set really helped me because if I did not I would have lost. This is the biggest win of my career and I will not be complacent with all these victories but continue to work hard,” the Portugal based Nigerian ping ponger said.

Undoubtedly if there is a man in form in Düsseldorf it is Quadri; understandably the coach sitting courtside, Martin Adomeit, was delighted.