2015: Why my husband should lead Lagos - Pastor Mayowa Ikuforiji 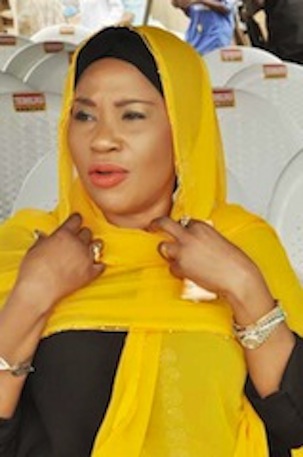 Injecting an American style into Nigerian politics, ‎Mayowa, the wife of Adeyemi Ikuforiji, the Speaker of the Lagos State House of Assembly, pleaded with Lagos residents on Sunday to throw their weight behind her husband as he seeks to replace Governor Babatunde Fashola in 2015.

‎At her husband’s official declaration of his intentions to contest Lagos’ highest seat of power under the platform of the All Progressives Congress, APC, she said he had the experience, qualification and interest of the people at heart.

Speaking of her husband for 29 years, she said, apart from him garnering extensive experience over the years as Nigeria’s longest serving speaker since the return of democracy in 1999, he has a clear vision on how to steer Lagos to a greater height.

‎”Adeyemi’s vision for tomorrow is as clear as the day.‎ His mission for the people’s good is as plain as the nose on our faces,” Mayowa told the mammoth crowd in Ikeja area of Lagos, western Nigeria.‎

She took the crowd back to November 1984 when she met her husband ‎with whom she now has four children, including a medical doctor, and asked residents for their support.

“We met in November 1984, about 30 years ago and God has blessed us with wonderful children for whom I also speak on behalf of today – Olusola, Dr. Olaomopo, Ayotelemi and Adeyooye.”

Borrowing the golden words of Vera Ann Farmiga, the famous American actress and movie director, Mrs. Ikuforiji sought to portray her husband as a family man who could be trusted by Lagosians to deliver on his promises.

“I have the best husband a wife could possibly have and he is the best father my children could have,” she said.

“By the grace of God and with your support, he will bring these personal and family qualities to bear as Lagos State Governor.”

She assured Lagosians that as the closest person to her husband, he will work hard and smart to make Lagos a better place.

“I am standing before you today, and in the presence of our Maker (God), and as the closest person to him on planet earth, that you have in him a man who will work for you.

“He has been close to you in the past years as the Speaker of the Lagos State House of Assembly. He has been feeling your pulse from that platform. He has been hearing your yearnings, your aspirations, and your perspirations.”

As the Speaker of the Lagos State House of Assembly, she said, Ikuforiji has been a major link between the bottom and the top.

‎”He understands where you are coming from, where you presently are, and where you want to be. Your concerns worries him even more than my concerns,” she said.

‎She took residents to their bedroom at their official residence in Ikeja GRA and told them she had heard his “bedroom cries”.

“I am confident that Adeyemi, my husband, my darling, my sweetheart, my heartthrob will deliver because I have heard his bedroom cries on what to do in the education sector,” she said.

He has also given hints on how to improve other sectors of the economy.

“Adeyemi is concerned about evolving a knowledge based economy and entrepreneurship, founded on promoting local industries, engaging Diasporic talents and stimulating the Lagos economy.‎”

Her husband is also prepared for the task of generating jobs, improving healthcare and ensuring that the transport sector is better.

“I believe in his words, and I ask you also to believe in them, because I trust he will not disappoint you, just as he has never disappointed me,” she said drawing a loud ovation.

As a pastor married to a Muslim, she mentioned the na‎me of God several times and told Lagosians she was telling them nothing but the truth.

“Before the almighty God, therefore, and with all my heart, I am presenting all I have to you. I am presenting Adeyemi, a real man of the people to you this day. I am giving you my heartthrob, my sweetheart, and my mentor to be your servant. He has seen a lot, and he is well prepared for the task,” she said.

She added: ‎”He has been active at home and abroad, and I am convinced that he is another change agent. Support him. Take him. Get him there and he will serve you. He is an experience you cannot regret.”

Beaming with smile, her husband stood up and waved at the crowd holding a broom, his party’s symbol.

He asked for the support of the party, Lagos residents, and God. He highlighted a ten-point agenda and promised that if given the chance, he would take Lagos to greater heights.

It was the second time in three days that an aspirant under the APC had declared his intentions publicly to vie for the highest office in the state.

Akinwunmi Ambode, a former Accountant-General of Lagos declared his intentions on Friday and about 13 other aspirants ‎of the APC have purchased nomination forms to slug it out on 15 November when the party’s primary election is scheduled to take place.