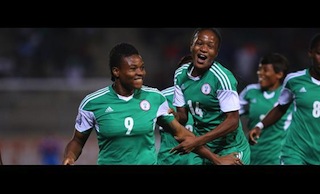 National telecoms operator, Globacom has congratulated the Super Falcons for defeating the Lionesses of Cameroun to lift the African Women Championship, AWC, trophy for the seventh time.

In a superlative performance, the Nigerian female national team trounced Cameroun 2-0 in the final match of African Women Championship in Windhoek, Namibia on Saturday.

Globacom in a statement issued on Sunday commended the team for not only winning the championship but also qualifying for the next Women World Cup in Canada.

“It is a delight seeing the Falcons play with so much confidence and cohesion which made it possible for the team to dominate the match and outclass the Camerounians,” Globacom said in the statement.

Desire Oparanozie scored the first goal for the Falcons in the 13th minute through a free-kick while the second
goal was scored by Asisat Oshoala in th 44th Minute when she latched on a pass from Francesca Odega.

The telco said it was glad that the Falcons have regained the title they lost at the last African Women Championship, thereby re-confirming the team as the undisputed champions of women football in Africa.

Globacom congratulated the players for their focus and skills as well as the coaching crew led by Godwin Okon for their tactical superiority, adding that the team kept improving with every match they played during the competition.

“We look forward to seeing the team perform creditably well in the next World Cup. We urge them not to rest on their oars and be prepared to fight with all their skills in order to make Nigeria and the continent of Africa very proud,” the statement read.

Globacom is the major partner of the Nigeria Football Federation and official sponsor of Nigerian national teams.