I'm A Champion In America —Martins 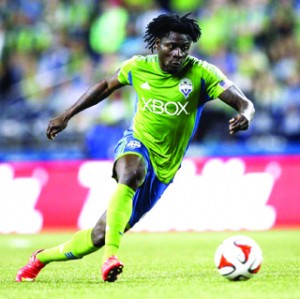 •Obafemi Martins in action for Seattle Sounders in the America's MLS

Nigerian international is on Cloud 9 after his American club, Seattle Sounders won the 2014 Supporters’ Shield in the Major League Soccer, MLS, at the weekend.

The Sounders bagged their second trophy of the season, to go along with another triumph in the 2014 US Open Cup in September. Martins, who gave substitute midfielder Marco Pappa an assist to enable him score an 85th minute winner for the Sounders, said he was glad with the victory as he has now added another feather to his cap in the MLS.

“I’m a champion and will continue to give my best to the team as we look forward to the MLS Cup Playoffs,” said the Super Eagles striker.

“The Shield is another feather in the cap of our organization,” Head Coach Sigi Schmid said of the historical implications surrounding the victory. “People forget that we’re still a very young organization. We’re six years in and we’ve won four Open Cups and a Supporters’ Shield.”

Forward Clint Dempsey said the Supporters’ Shield holds a great deal of weight for Seattle, even if the MLS Cup is still the team’s ultimate goal.

“To me, if you look around at other leagues, when you win the league it’s a big deal,” Dempsey said. “And that’s how we’re going to treat it, as a big deal. No matter what the public thinks of it, we were the best team throughout the course of the year.”