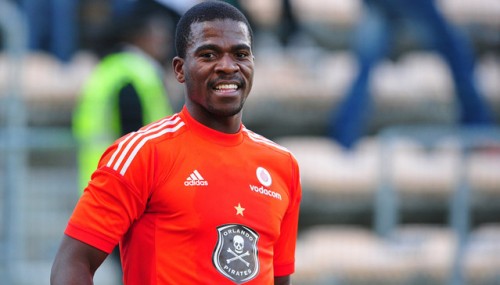 South Africa and Orlando Pirates captain and goalkeeper Senzo Meyiwa was shot dead late Sunday near Johannesburg, a police spokesman told AFP, with club officials describing his slaying as a “loss to the nation”.

Lieutenant-General Solomon Makgale said Meyiwa, 27, was gunned down at a house in Vosloorus, a township about 30 kilometres south of the city, and declared dead on admission to hospital.

“We can confirm that Bucs (Pirates) goalkeeper Senzo Meyiwa has been shot and sadly declared dead on arrival at hospital,” the South African Police Service (SAPS) said on its Twitter feed.

Police later said there were seven people inside the house, including Meyiwa, when two suspects entered and another remained outside.

Makgale said that the motive behind the attack remained unclear

The incident happened at around 2000 SA time (1800 GMT) in Vosloorus township, added police who did not comment on some media reports that the shooting was sparked by a row over a mobile phone.

“There was an altercation and Senzo Meyiwa was shot. The three suspects fled on foot after the shooting.

“We can assure South Africans that we will do all we can to bring Meyiwa’s killers to book.

Pirates, one of the most popular and successful South African football clubs, also confirmed that the player had been killed.

“@Orlando_Pirates family has learned with sadness of the untimely death of our number 1 keeper & captain Senzo Meyiwa,” the club tweeted.

Irvin Khoza, the club chairman, added: “This is a sad loss to Senzo’s family especially his children, to Orlando Pirates & the nation.”

Meyiwa played for his club in Soweto Saturday and has been in outstanding form for the national team during recent 2015 Africa Cup qualifiers.

South Africa team-mates Dean Furman and Andile Jali were among the first to react to the Meyiwa tragedy on Twitter.

“Beyond devastated at the loss of our captain and friend Senzo Meyiwa. Thoughts and prayers are with his family and friends at this terrible time,” tweeted England-based Furman, who plays for Doncaster Rovers in the third-tier in the English league.

“Just got a call and I was sleeping, but now I cannot sleep because of what I just heard,” tweeted Jali, who moved from Pirates to Belgium club Ostend this year.

After many years in the South African football shadows, Meyiwa had a meteoric climb to fame with club and country.

He displaced national squad goalkeeper Moeneeb Josephs as first-choice at Pirates, the only South African side to be crowned African champions.

And a recent injury to South Africa captain and goalkeeper Itumeleng Khune gave Meyiwa a chance in the national team, popularly known as Bafana Bafana (The Boys).

New national coach Ephraim ‘Shakes’ Mashaba not only promoted Durban-born Meyiwa to replace Khune but also made him captain of a team that has been in the doldrums for some years.

Meyiwa responded to his promotion by leading the team to victories over Sudan and Congo Brazzaville and draws with Congo and Nigeria, a country South Africa traditionally struggle against.

He did not concede a goal in the four matches and if South Africa defeat Sudan in eastern city Nelspruit on October 15 they will qualify the 2015 Africa Cup of Nations tournament.

He was also made captain of Pirates and helped the club defeat Ajax Cape Town 4-1 Saturday in a South African League Cup quarter-final.

Meyiwa gave a flawless performance and the only Ajax attempt that beat Meyiwa came from a penalty kick.