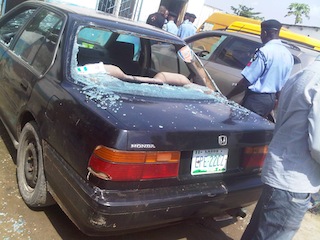 Several vehicles parked at the office of the Lagos State Traffic Management Authority, LASTMA, at Cele bus stop along Apapa-Oshodi expressway, were smashed on Monday afternoon by an angry mob after LASTMA officials allegedly beat up and pushed a conductor to death in Lagos State, western Nigeria.

Our correspondent learnt that LASTMA officials on patrol arrested the driver of a commuter bus and allegedly demanded for a bribe but the driver and conductor refused to part with any money.

And as they tried to force the driver to their office, the bus conductor reportedly pleaded with them to let them go.

This infuriated the LASTMA officials who reportedly beat up the conductor and pushed him off the bus, the conductor was then hit by a vehicle coming from behind. The vehicle reportedly crushed him to death on the spot.

Following the death of the conductor, the people who witnessed what happened mobilized and joined forces with hoodlums to take the victim’s corpse to LASTMA office.

After that, they started destroying vehicles impopunded by LASTMA in their premises. There was pandemonium along Apapa-Oshodi expressway as LASTMA workers, local government and court officials ran for their life. But the intervention of the police from various divisions at the scene prevented further mayhem.

Eyewitnesses said that the victim who died owned the bus but was operating as the bus conductor. When our reporter visited LASTMA office, the place was deserted, only heavily fortified policemen were seen at the premises.

Police vehicles were also parked inside the premises while officers were deployed to Cele area to prevent further attack.

At the time of filing this report, there was no official response from LASTMA.