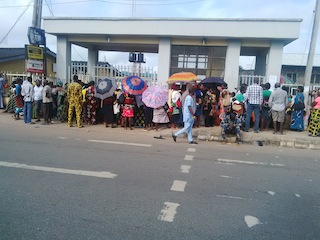 Patients stranded at the Specialist Hospital in Benin, Edo State

Hundreds of patients, mostly pregnant women and mothers who turned up at the Specialist Hospital in Benin for medical treatment this morning were disappointed as all gates leading to the second medical facility was locked by protesting casual workers.

While scores of the patients besieged the gate, scores of others sat on the other side of the road.

Even the unfortunate pregnant women who came for ante-natal clinic were also stranded as there was no medical personnel at the clinic and every other department of the hospital.

Anxiety and pain were clearly written on the faces of the expectant mothers who expressed worry about the incident.

This morning protest by the casual workers is the second within two weeks, as the angry protesters had on Tuesday 14 October, protested the non-payment of six months salaries.

One of the patients who spoke to P.M. NEWS, expressed disappointment at the alleged state government’s inability ‎to pay the casual workers.

The tired-looking ‎women who asked not to be named, said they were tired and exusted after standing for several hours under the scorching morning sun.

“It is very bad. How could the government have workers without paying them for six months. How do they expect them to feed their families and come to work. I don’t want to believe that‎ Oshiomhole will treat them the way they are telling us.

“Look at me, I am tired of standing and begging. My waist is paining me because of the heaviness of my pregnancy. We are the ones suffering the whole thing. We beg Oshiomhole to pay them their money so that they can attend to us,” a pregnant woman said.

‎A visit to the State Ministry of Health by P.M. NEWS to get government’s reaction on the matter did not yield results as the Commissioner in charge, Dr. (Mrs.) Aihanuwa Eregie, the Permanent Secretary, Dr. Peter Ugbodaga, was not on hand to respond to questions.