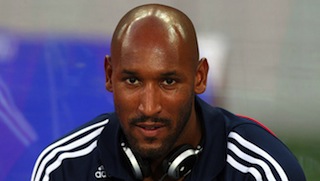 Controversial French striker Nicolas Anelka suffered a heavy defeat in India after his return to action Tuesday following a five-match ban for an anti-semitic gesture known as a “quenelle”.

It was the third defeat in four matches for the Peter Reid-coached Mumbai team following the 2-0 loss to Northeast United and a 3-0 setback against Atletico de Kolkata. The lone win came against FC Pune City 5-0.

Anelka, who missed the first three games to complete the ban, played the entire 90 minutes but failed to make up for the absence of Mumbai’s other top player, Freddie Ljungberg of Sweden, who is out of the eight-team league because of a hamstring injury.

Until he joined Mumbai for an undisclosed fee, Anelka had been without a club after he was fired by West Bromwich Albion early this year for the “quenelle” gesture.

Anelka won 69 French caps and scored 14 goals in an international career which ended in disgrace when he was thrown out of the 2010 World Cup in South Africa following a row with coach Raymond Domenech.

He was handed an 18-match ban for that bust-up, which effectively ended his international career.

The 10-week ISL is modelled along the lines of cricket’s cash-rich Indian Premier League, with veteran, if ageing, former international greats fronting each team.