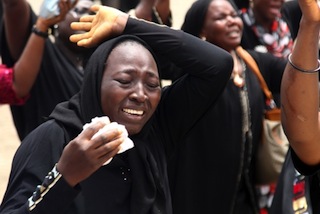 Some parents and relatives of the abducted students of Government Secondary School (GSS), Chibok, Borno, have appealed to the Boko Haram sect to fulfill its promise of releasing their daughters.

They made the appeal in telephone interviews to NAN on Tuesday. Mr Shettima Haruna, one of the parents of the abducted girls, said they had suffered in silence for the past six months because the abduction.

“We have suffered immensely due to the abduction of our girls by the insurgents. Some parents have died due to heart problems caused by the kidnapping of the girls,” Haruna said.

Mr Solomon Ali, a Chibok Community Leader, said that the abduction had adversely affected the lives of many parents in the community.

Ali said although government had not formally informed the community of the planned released of the girls, they were happy with the plan.

“The government has not informed us about the expected release of the girls. We only heard the news in the media that the insurgents were willing to release the girls under a ceasefire with the government,” he said.

Ali said that the community was excited by the media report. “We began to develop interest in the issue when the media carried the news but we were disappointed that nothing has happened yet.

“Up till this moment nobody has contacted us to say what actually happened. Even the local government chairman has no information about the issue, because I spoke with him in the morning,” he said.

Ali said that the community had resorted to prayers on the issue. “We have taken our problem to our creator because all human efforts have failed in rescuing our children.

“It is only God that has the power to help rescue our girls and we believe he will help us,” he said.