My husband has been very supportive - Aroyehun 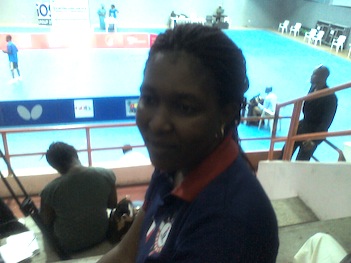 To Nike Aroyehun, the support she is receiving from her husband, Mr. Akin Ojo has been a driving force in her table tennis career since she got married.

Aroyehun played for the female team of Nigeria Security and Civil Defence Corps (NSCDC) which also consisted of the duo of Rashidat Ogundele and Aminat Fashola. Aroyehun, mother of two, played the last match that saw her team win the female category of the league and the sum of N250,000.

She said she was glad with her performance in the league as this was the first tourney she would play two years after she went on sabbatical because of pregnancy.

“I’m so happy to have a good man in my husband, Akin Ojo, an assistant weightlifting coach. He has been very supportive to my cause in table tennis. You will not believe it but he has been taking care of our kids since I arrived Lagos to participate in the national league. I’m so grateful because it has made my come back easy.

“I’m also glad with my performance in the league because this is the first competitive tournament I will play in the last two year and I thank God that I played the last match that gave my team the victory.

“I want to commend the leadership of the table tennis federation for coming with an innovation like this to keep the players busy. The organisation of the league would go a long way in bringing back the lost glory of our sport especially with the new board of the NTTF led by Mr. Wahid Enitan Oshodi which has been doing a good job to reposition our game,” she said.