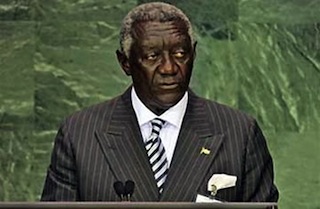 The ECOWAS Pre-Election Fact Finding Mission has advised the Independent National Electoral Commission (INEC) not to be complacent about its past achievements but do everything possible to conduct credible elections by 2015.

Former President of Ghana, John Kufour, gave the advice when he led the mission’s delegation to INEC on Tuesday in Abuja.

He said it was commendable that the commission conducted credible elections in 2011 but should not rely on that in performing the responsibility given to it.

“So, I was here through the elections and I was impressed by the conduct your commission put out to the elections.

“It was a difficult time and there were challenges but in spite of that you came across as a body that was seriously focused and discharged this responsibility credibly.

“So, I congratulate you on your past performance but I will at this point say you should not dwell on your past Laurent. I am sure you are looking ahead,” Kufour said.

Kufour said that the mission was at INEC for 2015 pre-election assessment as well as to advise the country.

“We come as a fact finding body, first to learn from you on the preparations your commission is putting in place for peaceful and successful election next year,” he said.

Kufour said the mission had visited the Nigeria Police Force to learn from its preparation to ensure security of citizens and their assets so that they could vote in peace.

“We will also talk with the parties across the board as far as possible to learn about how they are also shaping themselves up for the election and they must be reminded to play fair,” he said.

Kufour said after the mission meeting with necessary stakeholders, it would write its report to the ECOWAS commission to advise ECOWAS nations through the presidents in the sub region.

In his address, Prof. Attahiru Jega gave the assurance that the commission was adequately prepared to deliver free, fair and credible elections by 2015.

Jega said INEC had more time to prepare for the 2015 elections than it had for the 2011 elections, adding that it had used the time most effectively in terms of learning lessons and factoring them into 2015 elections.

“We are pleased that we were able to lift the bar in 2011 but we are also aware that that election could have been better.

“So since 2011 we have devoted a lot of energy and attention, using the time available to us, to see how we can remarkably improve the performance of the commission in 2015 in terms of delivering credible and peaceful election in our country,” he said.

The chairman said that the commission had done a lot on coding its election materials, training of staff, collaborating with relevant stakeholders and security agencies to ensure the success of the elections.

On security, he said the commission was working with security agencies to conduct election in all the states of the federation, including the three states currently under State of Emergency