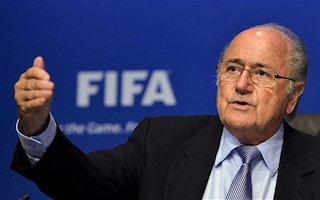 Blatter said earlier this week that German goalkeeper Manuel Neuer should have been crowned as the best player of the World Cup rather than Argentine Messi — something Ancelotti sees as potentially influencing those whose Ballon d’Or votes will count.

And the former AC Milan and Chelsea boss said he believes Ronaldo’s goalscoring feats in Madrid’s Champions League success makes him the deserving winner for the Ballon d’Or.

“It always surprises me what he does, but what are we going to do? It’s impossible to shut the mouth of the FIFA president,” said the Italian ahead of Madrid’s Copa del Rey game against UD Cornella on Wednesday.

“There isn’t much to think about. It is Cristiano’s year, he scored goals and won important titles. There should be no doubt that he is the Ballon d’Or.”

Madrid begin their defence of the Copa del Rey in fine form having swept Barcelona aside 3-1 at the weekend to register their ninth consecutive win in all competitions.

Ancelotti has left Ronaldo, Iker Casillas, Sergio Ramos, Pepe, Luka Modric and Toni Kroos out of his squad for the visit to Catalonia with the security blanket of the second leg to come at the Bernabeu on December 2.

“It is a competition that has given us much success and we have good memories of. We will try to do the same as last year starting from today.

“We need to play a serious game and continue with our run of form. I also will give minutes to those that have been improving their physical condition.”

Another absentee from the Real squad is Gareth Bale as he continues to be sidelined by a gluteal injury, but Ancelotti retains some hope that he could be fit for the visit of Liverpool to the Bernabeu in the Champions League on Tuesday.

“He has had a strange muscle injury. We will see if he is ready for next week in the game against Liverpool. We still don’t know when his expected return date is.”