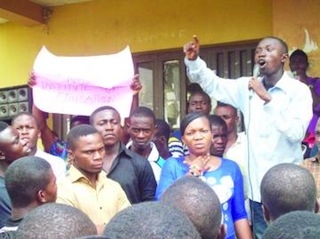 Activities at the Edo State Government House were put on hold on Wednesday by protesting workers of the state owned tertiary institutions over unpaid salaries and alleged poor condition of service.

The protesters who adorned themselves in black attire in their hundreds, also demanded for immediate payment of 16 months salary arrears said to have been approved between July 2009 and October 2010

Among other things, the aggrieved workers also decried unpaid promotion arrears, stoppage of Trust fund/ Cooperative monies for the running of the institutions, dilapidated infrastructures and non provision of fund for immediate accreditation of courses

President of the Coalition of Unions of Institutions, Fred Omonuwa, disclosed that they have engaged the state government through the Commissioner for Education over the issues, adding that, the workers can longer continue to bear the pains.

He also frowned at the decision of the state government to resort to selective preference by choosing to pay their counterparts in sister institution, Ambrose Alli University, Ekpoma, regular monthly pension and gratuities and increased in subvention to AAU while they are left unattended to.

The State Head of Service, Mr Igbaeremen Obazele, who received the protesters on behalf of governor Adams Oshiomhole, said government had since constituted a team headed by Rev Peter Obadan, a former Deputy Governor, to look at the issues raised. He attributed the delay to failure by the management of three out of the four institutions to make available the needed statistics.

“You don’t hold meeting without computation. You cannot negotiate without adequate records. The summary of this issue is money. The summary of your demand is increase in subvention and the government cannot make increase subvention without knowing what is on the ground,” Obazele told the protesters.