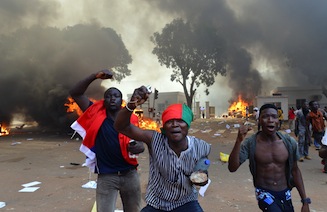 Angry demonstrators went on the rampage in Burkina Faso on Thursday, setting parliament ablaze in a surge of violence that forced the government to scrap a vote on controversial plans to allow President Blaise Compaore to extend his 27-year rule.

Hundreds of people broke through a heavy security cordon and stormed the National Assembly building in the capital Ouagadougou, ransacking offices and setting fire to cars, before attacking the national television headquarters.

One man was killed in the chaos that erupted in the poor west African nation shortly before lawmakers were due to vote on the controversial legislation, AFP correspondents said.

The government, facing its worst crisis since a wave of mutinies shook the country in 2011, later announced it was calling off the vote but it was not immediately clear if this was a temporary move.

Black smoke billowed out of smashed windows at the parliament building, where several offices were ravaged by flames, including the speaker’s office, although the main chamber so far appeared to be unscathed.

“The president must deal with the consequences,” said Benewende Sankara, one of the leaders of the opposition which had called for the people to march on parliament over the Compaore law.

The country has been tense for days in the run-up to Thursday’s vote over the constitutional changes, which the European Union had warned could jeopardise stability.

Police were out in force around the parliament after mass rallies called by the opposition earlier this week but failed to stop the onslaught despite using tear gas against the protesters.

The European Union has urged the government to scrap the legislation, warning that it could “jeopardise… stability, equitable development and democratic progress”, and had called for all sides to refrain from violence.

Several thousand protesters had marched through the capital on Wednesday, the day after street battles erupted during a mass rally by hundreds of thousands of people against what they see as a constitutional coup by supporters of Compaore.

The legislature had been due to examine a proposed amendment that would allow Compaore, who took power in a coup in 1987, to run for re-election in November next year.

“October 30 is Burkina Faso’s Black Spring, like the Arab Spring,” said Emile Pargui Pare, an official from the Movement of People for Progress (MPP), a young and influential opposition party.

Compaore’s bid to cling to power has angered the opposition and much of the public, including many young people in a country where 60 percent of the population of almost 17 million is under 25.

Many have spent their entire lives under the leadership of one man and — with the poor former French colony stagnating at 183rd out of 186 countries on the UN human development index — many have had enough.

The situation is being closely watched across Africa where at least four heads of state are preparing or considering similar changes to stay in power, from Burundi to Benin and the Democratic Republic of Congo.

Compaore was only 36 when he seized power in the coup in which his former friend and one of Africa’s most loved leaders, Thomas Sankara, was ousted and assassinated.

The 63-year-old has remained in power since then, re-elected president four times since 1991 — to two seven-year and two five-year terms.

In 2005, constitutional limits were introduced and Compaore is coming to the end of his second five-year term.

The opposition fears the planned new rules would enable Compaore to seek re-election not just once, but three more times, paving the way for up to 15 more years in power.

The third largest party in parliament had said at the weekend it would back the amendment, which would have given the ruling party the two-thirds majority needed to make the change without resorting to a referendum as first promised.

Protesters have erected barricades and burned tyres in the capital since the proposal was announced on October 21.

Known in colonial times as Upper Volta, the landlocked country became independent from France in 1960 and its name was changed to Burkina Faso (“the land of upright men”) in 1984.