Carniriv 2014 will be best carnival ever, says Sam Dede 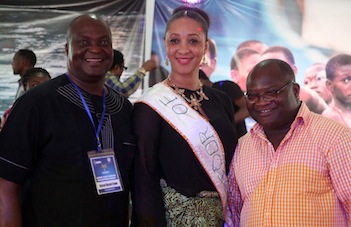 FILE PHOTO: Deacon Vincent Erinwo, Mandy Stewart of the Treasure Base Band and Chris Anani of the RSTDA at the 2014 Carniriv press briefing

The Director General and CEO of the Rivers State Tourism Development Agency, Dr Sam Dede has said that the 2014 edition of Carniriv, the Port Harcourt Carnival is set to go down in history as the most colourful and memorable carnival event ever witnessed on the African continent in recent times.

Dede, an award winning actor and lecturer, gave the hint at a media interactive forum held in Port Harcourt to announce the 2014 edition of the carnival which is scheduled to hold from the 14 to 20 of December in Port Harcourt, the Rivers State capital.

According to him, an estimated number of over five hundred thousand participants made up of residents, tourists, fun lovers and representatives of corporate bodies will converge in Port Harcourt during the one-week long carnival, with daily business exchanges running into several millions. He also revealed that the carnival is repackaged to deliver value and cement Port Harcourt’s reputation as a foremost tourist city in Africa.

“Because of the traditional high influx of carnival lovers to our city during our annual showpiece event, we have put in place adequate security measures to ensure the protection of lives and property during the entire duration of the carnival. We are also working with other stakeholders in the health and other key sectors to ensure that we create a conducive environment for our visitors,” Dede said.

He also spoke about the technical innovation of the 2014 edition of the carnival. “This year, we are set to introduce our state-of-the-art performance stage spanning 140 feet and reputed as the biggest of its kind in Africa. The stage has the capacity to hold a large collection of performers at once and withstand heavy duty
equipments and stage accessories. The stage will also be deployed for the first time for the benefit of sponsors in the areas of branding and related purposes,” he explained.

In response to media enquiry, Dede provided insights to the commercial opportunities available for the 2014 edition of the Port Harcourt carnival. “We have opened up the carnival for commercial exploitation from interested corporate bodies by packaging at least 12 signature carnival events into stand-alone brands for category
sponsorships. Each category sponsor is entitled to multiple levels of commercial and non-commercial exploitations such as publicity, speaking opportunities, branding, the distribution of company mementos and other forms of corporate canvassing,” he said.

Chairman of the Board of Rivers State Tourism Development Agency, RSTDA, Deacon Vincent Erinwo assured that the RSTDA will judiciously expend every fund released by the government for the purpose of the carnival, reiterating that the carnival is a project that is dear to the heart of the government and people of the state.

“We at the RSTDA have being given a matching order not only to put the scare funds to the best use but to also seek for sponsorship and collaboration from both corporate and non-corporate organisations to make the carnival a self sustaining annual exercise in line with the vision of the state government,’ he said.

Deacon Erinwo also promised that the 2014 edition of Carniriv, which is themed as the ‘One Love, One People’ edition will be remembered for its organisation, audience management and satisfaction.

“We will exceed the expectation of our guests and indigenes alike with the quality of world class performers and chart toppers that will grace our events for one week. I will urge interested carnival lovers from both far and near to make early preparations in terms of visa secure and other travel arrangements in order to witness the world-class fiesta that awaits them from the 14th to 20th of December this year,” he said.