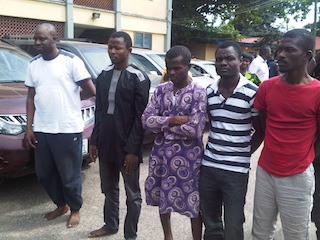 The suspects and the sixteen cars recovered from them were shown to journalists on Thursday at the State Police Command’s Headquarters, Ikeja, Lagos, western Nigeria.

Vehicles recovered from them include Toyota Camry, Nissan, Toyota Sienna, SUVs and others.

They were arrested in various cities in Nigeria by Lagos State Anti-Robbery Squad led by CSP Abba Kyari.

Alhaji Tanko was arrested in Abuja, Nigeria’s capital, while a Liberian, Andrel, and Ghanaian, Nana, were arrested in Oyo and Rivers states respectively.

Adebayo who allegedly specialized in forging the engines and chassis numbers of vehicles, was arrested in Ayobo area of Lagos.

The suspects admitted they committed the crime and offered explanations about how they went into the business.
Andrel, who said he was a UAC driver, said Nana convinced him to join the gang and since then, he had sold about four cars.

Nana admitted that he had sold two cars and said it was the idea he shared with Andrel in Nigeria. CP Aderanti said, following cases of armed robbery involving snatching of cars, he mandated CSP Kyari to go after them.

He said through the deployment of cutting edge technology, intensive surveillance and aggressive patrol, the suspects were arrested in different cities in Nigeria. Aderanti said the 16 vehicles previously stolen were recovered in different locations in Abuja, Port Harcourt and Benin.