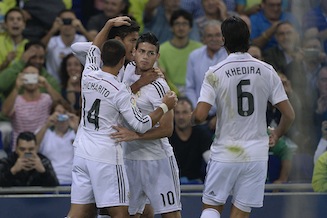 An understrength Real Madrid began their defence of the Copa del Rey with a comfortable 4-1 win over third-tier UD Cornella in the first leg of their fourth-round tie on Wednesday.

With World Player of the Year Cristiano Ronaldo among a host of star names given the night off, it was centre-back Raphael Varane who produced the finishing touch in the first half as his bullet header put the visitors in front after just 10 minutes.

Cornella, from the outskirts of Barcelona, had their magic moment 10 minutes later, though, as Oscar Munoz saw off challenges from Varane and Alvaro Arbeloa before firing high past Keylor Navas to equalise.

However, in a game played at the home of top-flight side Espanyol, Varane restored Real’s lead from another corner nine minutes before half-time and Javier Hernandez put the tie beyond the Catalans with a fine angled finish eight minutes into the second period.

Madrid boss Carlo Ancelotti then withdrew James Rodriguez, one of only four players to retain his place from Saturday’s 3-1 Clasico victory over Barcelona, for Marcelo.

And the Brazilian rounded off the scoring when he smashed home from a narrow angle after Jose Manuel Segovia had parried Isco’s initial effort.

With the second leg still to come at the Santiago Bernabeu in early December, Real remain very much on course for a last 16 meeting with La Liga champions Atletico Madrid.

Sevilla are also well on their way to a place in the last 16 as on-loan Liverpool striker Iago Aspas scored a hat-trick in their 6-1 thrashing of Sabadell.