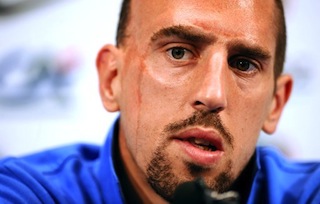 Bayern Munich’s France winger Franck Ribery has accepted Hamburg’s apology after one of their fans hit him in the face with a scarf during the Bavarians’ German Cup win.

Ribery scored for title-holders Bayern in Wednesday’s 3-1 win at Hamburg in the second round of the German Cup.

But Ribery was insulted in added time when a fan stormed on to the Imtech Arena pitch, hit the France star in the face with his Hamburg scarf and showed him the middle finger of both hands before security guards intervened.

“That shouldn’t have happened, but it’s not so bad,” the Frenchman told Sky Sports, having started the match after recovering from a knee injury which hampered the start of his season.

“It’s always forgotten after the game. I don’t know what that was all about. It wasn’t an easy game for me, I got kicked a lot.”

“Dear FC Bayern, dear Franck Ribery, we apologise for the scenes just before the end of the game, that is not Hamburg!” wrote the club on their official account.

“Franck can handle himself, something like that shouldn’t happen,” Lahm commented, while chairman Karl-Heinz Rummenigge praised Ribery for not reacting. “He showed composure,” Rummenigge said.

Bayern are four points clear of their rivals in the Bundesliga and host Borussia Dortmund in Munich on Saturday.