Roma level top in Serie A as Juve beaten 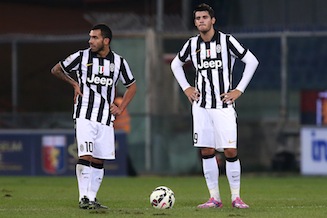 An injury-time goal from Genoa midfielder Luca Antonini handed Juventus their first defeat of the season Wednesday while a 2-0 win for Roma allowed the title challengers to pull level at the top of Italy’s Serie A.

Udinese’s 3-0 defeat at Fiorentina allowed AC Milan, held 1-1 at Cagliari, to move three places up to third with Sampdoria still in fourth despite suffering a last-gasp 1-0 defeat at Inter Milan.

Both AC Milan and Sampdoria are six points off the leaders’ pace, with Udinese dropping to fifth, also on 16 points and one ahead of Lazio, who face Verona on Thursday.

Gonzalo Higuain should have handed Napoli all three points in the dying minutes away to Atalanta but the Argentinian striker saw his spot-kick saved by Marco Sportiello.

Napoli remain seventh and are now seven points adrift of Juventus and Roma.

Juventus had moved clear of Roma last weekend after Rudi Garcia’s men were held to a scoreless draw away to Sampdoria but were frustrated at the Luigi Ferraris stadium where goalkeeper Gianluigi Buffon was making his 500th appearance in a Bianconeri jersey.

Juve spurned several chances, notably when Angelo Ogbonna’s toe-poke hit the crossbar, and then home goalkeeper Matia Perin pulled off a superb one-handed save from Alvaro Morata at the death after he had replaced fellow Spaniard Fernando Llorente on 65 minutes.

The match looked to be heading for a draw until Antonini stunned Massimiliano Allegri’s men by bundling a cross from the left past Buffon after being left unmarked in front of goal.

“You can’t concede in the last 30 seconds like this,” Allegri told Sky Sport. “We should have come away with the minimum of a draw. But we will take stock of this result and learn from it.”

It was Juve’s first league defeat in injury time since a reverse to Roma in 2010, and gave Garcia’s men a huge boost as they dominated Cesena at the Stadio Olimpico.

Genoa coach Gian Piero Gasperini admitted: “It’s one of the most beautiful days of my career.

“Juventus have lost very rarely in the past few seasons so big compliments to the lads.”

Garcia, meanwhile, insisted: “Juve’s result is of no concern to us. Our focus has to be on our team and the crucial thing is for us to remain focused.”

Lukasz Skorupski replaced Morgan De Sanctis in goal for Roma and Seydou Keita returned to the midfield while Ashley Cole was brought in at left-back following a spell on the sidelines due to a dismal display in the 7-1 drubbing by Bayern Munich. 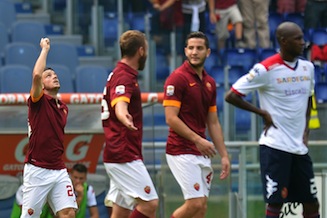 Destro had the ball in the net on 28 minutes when he fired a powerful header past Federico Agliardi, but was a fraction offside when he started his run to meet Miralem Pjanic’s free-kick from the left.

Agliardi had to react quickly to keep Alessandro Florenzi’s corner from swerving into the net in the final 10 minutes, but from the resultant corner the ‘keeper was finally beaten a second time.

Mapou Yanga-Mbiwa had replaced Davide Astori on 54 minutes and did well to keep the ball in play at the byline for Daniele De Rossi to bundle a volley home from close range.

In Bergamo, Napoli were stunned 13 minutes into the second half when German Denis ran in unhindered between Christian Maggio and Raul Albiol to nod Cristian Raimondi’s cross past Rafael.

Napoli should have levelled two minutes later but Jose Callejon somehow skied Faouzi Ghoulam’s cross despite being less than a metre from goal.

Atalanta suffered a blow late on when Luca Cigarini saw red for a second bookable offence, and Napoli capitalised soon after when Higuain spun on Lorenzo Insigne’s pass into the area to beat Sportiello down low.

Napoli won a penalty in the dying minutes after Guglielmo Stendardo’s foul on Cristian Zapata, but Sportiello did well to keep out Higuain’s effort from 12 yards.