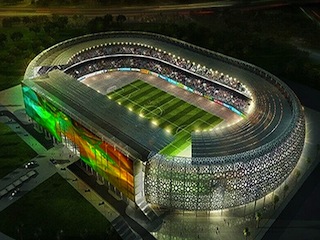 It is now official. The 2015 Africa Cup of Nations qualifying cracker between the Super Eagles and the Bafana Bafana of South Africa will take place at the Akwa Ibom International Stadium, Uyo.

Vice President of the Ghana Football Association (GFA), Mr. Fred Crentsil, who was mandated by the Confederation of African Football to inspect the facility, has given the infrastructure very high marks.

“You guys have a wonderful facility here. It is one of the best I have seen anywhere around Africa and elsewhere. It is of the same standard and mould as Soccercity (the main stadium in Johannesburg that hosted the final match of the 2010 FIFA World Cup finals) with a lower capacity.

“I am particularly amazed that there are provisions for the physically–challenged persons. Everything is taken care of here. I am hugely impressed,” Crentsil said in Uyo on Thursday.

The CAF official inspected the stadium as well as hotel facilities, in company of NFF’s Assistant Director of Competitions, Mr. Bola Oyeyode.

NFF President, Mr. Amaju Melvin Pinnick had, after inspecting the facility three weeks ago, announced that the venue would host the Super Eagles/Bafana Bafana clash.

Meanwhile, the NFF Electoral Appeals Committee, constituted at the Extra-Ordinary General Assembly of 20 September 2014 in Warri, Delta state, will on 11 and 12 November sit on pending appeals from the NFF Executive Committee elections of 30 September in the same city. 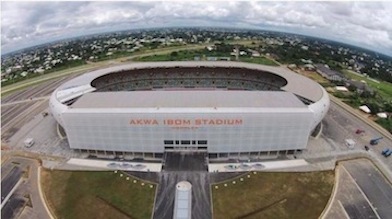 Alhaji Muazu Suleyman, a former member of the NFF Executive Committee, who contested for the post of Vice President alongside Barr. Seyi Akinwunmi (eventual winner), High Chief Emeka Inyama and Hon. Shehu Adamu, have appealed against the result.

Barr. Iyke Igbokwe, Vice Chairman of the NFF Disciplinary Committee, is also contesting his defeat in the election of the South–East representative. The contest was among eventual winner Felix Anyansi–Agwu, Barr. Jude Obikwelu and Igbokwe.