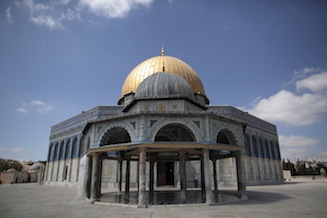 Clashes erupted in the West Bank Friday after weekly Muslim prayers while security forces deployed heavily around Jerusalem’s flashpoint Al-Aqsa mosque which reopened following the killing of a Palestinian by police.

Al-Aqsa, in the Old City, and adjacent neighbourhoods have seen months of violence, and the mosque compound has been a rallying point for Palestinian resistance to perceived Jewish attempts to take control of it.

Jerusalem was relatively calm Friday a day after youths clashed with police following the shooting dead of Muataz Hijazi, a Palestinian suspected of trying to murder hardline Jewish rabbi Yehuda Glick, linked to the tensions at Al-Aqsa.

During the unrest Thursday, Israel ordered a rare closure of the mosque compound, sacred to both Muslims and Jews, but the area reopened Friday.

Fearing unrest after Hijazi’s killing, hundreds of additional police were deployed around the Al-Aqsa mosque, restricting entry for Muslim men to those over 50.

Prayers were more sparsely attended than usual but held without incident, an AFP correspondent said.

Shortly afterwards, a handful of Palestinian youths outside the Old City threw stones at police, who quickly dispersed them, police spokeswoman Luba Samri said in a statement.

In the West Bank about 300 Palestinians threw stones at Israeli security forces at the Qalandiya checkpoint just north of Jerusalem.

The Israelis responded with live fire and rubber bullets and wounded around a dozen people, Palestinian security sources and medics said.

Jerusalem’s Old City was teeming with additional police, including many in riot gear, after an Israeli clampdown on the compound.

The closure was the first for decades and prompted a spokesman for Palestinian president Mahmud Abbas to condemn the move as an Israeli “declaration of war.”

The resident imam at Abbas’s headquarters in Ramallah echoed the president’s words, saying the closure had been a “declaration of war … to Muslims across the world” and calling for people to “defend” Al-Aqsa.

Jerusalem has been shaken by months of unrest sparked by the murder of a Palestinian teenager in July in revenge for the killings of three Jewish teenagers in the West Bank.

A 50-day summer between Israel and Palestinian militants in the Gaza Strip intensified protests and clashes in the Holy City.

A controversial visit to Al-Aqsa in 2000 by Ariel Sharon, who later became Israel’s prime minister, sparked the second deadly Palestinian intifada, or uprising.

Police, some in riot gear, manned a series of checkpoints leading from the Old City’s outer gates all the way to the compound, an AFP correspondent said.

They checked identity papers of people passing between the barricades, both those on their way to pray and those who worked nearby.

Zuheir Dana, 67, said he was unable to get from his shop to his home.

“I wanted just to get home, which is about 50 metres (yards) away from the Al-Aqsa compound, but police didn’t let me through,” he said.

“It’s been bad every day here since Ramadan,” he added, referring to the Muslim holy month that fell in July.

Markets in the Old City, normally bustling on a Friday morning, were nearly deserted due to the security measures.

In the Gaza Strip, meanwhile, thousands turned out at the call of militant organisations Hamas and Islamic Jihad to honour Hijazi, whom Islamic Jihad claimed as one of its members.

Demonstrators burned Israeli flags and held up posters of Hijazi.

Fathi Hamad, a leader of the Hamas movement, said at Friday prayers in Gaza City that Israel would “not win — we will resist.”

He urged Arabs in Jerusalem to “stay strong. We are with you to wage the battle of Al-Aqsa!”

The hospital treating Glick said his condition was slightly improved Friday but that his life was still in danger.