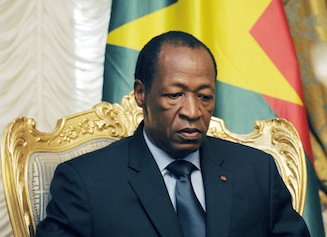 Burkina Faso’s President Blaise Compaore was toppled on Thursday as the army took power after protesters set parliament ablaze in a popular uprising against the veteran leader’s 27-year-rule.

Around 30 people were killed and more than 100 injured in violence that rocked that rocked the country, the leading opposition figure Benewende Sankara said.

It was not clear if the toll related to the whole of the country or just the capital Ouagadougou, where protesters burned down parliament in an uprising against the 27-year rule of President Blaise Compaore.

The demonstrators earlier forced the government to scrap a vote on controversial plans to allow Compaore to extend his reign, with tens of thousands of people joining a mass rally in the capital Ouagadougou calling for the strongman to go.

Hundreds of people stormed parliament and other public buildings including the national television headquarters, ransacking offices and setting fire to cars, despite a heavy police and army presence across the capital.

The army, in a hastily arranged press conference, announced it was seizing power and pledged to restore constitutional order within 12 months. It imposed a dusk-to-dawn curfew and announced the dissolution of Compaore’s government and the national assembly, and the creation of a transitional body to run the country.

The communique, read out by an officer, was signed by the army chief of staff Nabere Honore Traore.