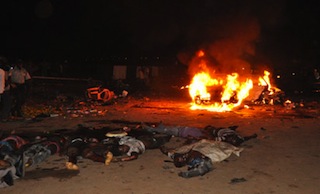 Multiple witnesses said three men entered the state-run Gombe Line station early this morning and that each dropped a bag among the buses.

Gombe’s police chief Abdullahi Kudu said the blasts went off at roughly 9:00 am (0800 GMT) and that three men had been arrested.

“As for the death toll, we are still working on that,” he said of the attack in the state capital Gombe city.

Gombe shares a border with all three northeast states under emergency rule because of the Boko Haram uprising: Adamawa, Borno and Yobe.

Kudu said he believed the suspects had come from Yobe where Boko Haram is believed to be in control of a series of towns and villages.

There was no claim of responsibility and attacks by criminal groups have been previously blamed on the Islamist insurgents.

But the militants have claimed credit for a series of bus station bombings this year, including two — in April and May — on the outskirts of the capital Abuja.

An October 23 attack at a bus station in Bauchi state, which neighbours Gombe, killed five people, with many blaming Boko Haram.

An employee of the Gombe Line company, Lawanti Aliyu, said he saw several people lying on the ground after the blasts who appeared to be either dead or seriously injured, but he was unable to estimate a death toll.

Nigeria on October 17 said it had agreed to a ceasefire with Boko Haram, raising hopes that the brutal five-year conflict could be nearing an end.

But the violence has continued at a relentless pace and many have questioned the credibility of the so-called Boko Haram envoys reportedly negotiating with Nigeria.