Presidential campaign gets under way in Tunisia 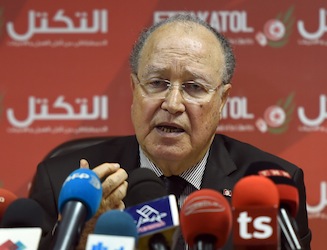 Campaigning opened Saturday for a presidential election in Tunisia, the birthplace of the Arab Spring, with secularist Beji Caid Essebsi seen as the frontrunner after his party won milestone parliamentary polls.

Essebsi, 87, leads a field of 27 candidates in the November 23 vote, after Nidaa Tounes came out on top in last Sunday’s legislative election, beating the previously dominant moderate Islamist movement Ennahda.

If no candidate secures an absolute majority on November 23, a second round of voting will take place in late December.

It will be the first time Tunisians have voted freely for their head of state.

Between independence from France in 1956 and the revolution, Tunisia had just two presidents — the “father of independence” Habib Bourguiba and Ben Ali who overthrew him in a 1987 coup.

Ben Ali occupied the Carthage Palace until he was himself forced out, this time by people power, fleeing to Saudi Arabia on January 14, 2011.

In an effort to prevent a new dictatorship, the new president’s powers will be restricted under a constitution adopted in January, with most executive power resting with the premier from the parliamentary majority.

Despite his advanced age, Essebsi remains the favourite to become president.

Under Bourguiba, he held the key portfolios of defence, interior and foreign affairs, and was also parliament chief under Ben Ali in 1990-1991.

Essebsi has vowed to restore the prestige of the state, a pledge that will be popular with many voters in a country destabilised by political, economic and security crises since the revolution.

He will launch his campaign on Sunday at Bourguiba’s mausoleum in Monastir, according to Nidaa Tounes (Call of Tunisia).

If Essebsi supporters see him as the only way to block the Islamist rise, his opponents accuse him of being a product of the old regime who seeks to restore it.

Ennahda, which has opposed the very principle of holding a presidential election, has not put forward its own candidate.

Nor has it said if it will back another, not even Marzouki who was elected in late 2011 by an Ennahda-dominated Constituent Assembly when the movement led a coalition government.

“We are still looking for the candidate who embodies the objectives of the revolution,” he said, adding that the Shura Council, Ennahda’s top body, would meet on Sunday and Monday to discuss its next move.

Ennahda is now Tunisia’s second largest party after winning 69 of the assembly’s 217 seats in the October 26 general election.

It has capitalised on the controversial period from late 2011 until early 2014 when the Islamists were in power, marked by the emergence of armed jihadist groups.

Ben Jaafar has urged “social democrats” to unite behind a single candidate to beat Essebsi.

Despite post-revolution instability, Tunisia is seen as the last hope of establishing a democratic regime in an Arab Spring state, the others having descended into chaos or repression.

But it still faces significant challenges, including a growing jihadist movement blamed for the deaths of dozens of police and soldiers and the killing of two anti-Islamist politicians.

Stability is also being undermined by a weak economy and rampant unemployment, particularly among young graduates.