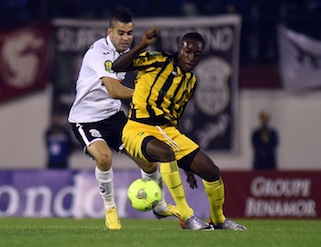 Algerians Entente Setif won the CAF Champions League Saturday despite being held 1-1 at home by Congolese V Club in the second leg of the final.

Setif lifted the premier African club football trophy on the away-goal rule after a 3-3 aggregate tie having drawn the first leg 2-2 in Kinshasa last weekend.

Sofiane Younes scored for Setif after 49 minutes and Lema Mabidi equalised five minutes later before a sell-out 35,000 crowd in Blida.

It was a remarkable victory for the Black Eagles as Algerian football officials wanted the club to withdraw from the Champions League, believing they would not be competitive.

Setif also won the title in 1988 and join JS Kabylie as Algerian clubs who have conquered Africa twice.

V Club conceded a foul and a corner and cleared a header off the line within two minutes of the kick-off as Setif sought an early goal.

The Congolese survived the early storm to create the best chance of a cagey opening half on 40 minutes, but Guy Lusadisu Basisila fired over.

Younes poked the ball into the net at the far post after two better placed team-mates failed to connect with an El-Hedi Belameiri cross.

But the joy of the Algerian supporters was short-lived as Mabidi, who scored twice in the first leg, pounced on a partly cleared cross to hammer the ball into the net.