US judge says nurse can leave home in Ebola row 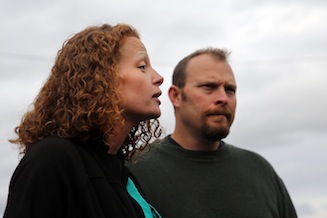 A US judge ruled Friday that a nurse quarantined by her home state after treating Ebola patients in Africa could leave home and frequent public places, saying she was not infectious.

The decision from a district judge in the northeastern state of Maine is the latest twist in a bitter row over enforced quarantine of American medics returning from relief work in west Africa.

It reversed a temporary order that prevented her from visiting cinemas and shopping centers, and demanded she keep three feet away from others while Judge Charles LaVerdiere examined the case.

Kaci Hickox insists that she is perfectly healthy, and since returning to the US has fought efforts by authorities to keep her in quarantine for 21 days, the incubation period for the deadly virus that has killed nearly 5,000 people, most of them in west Africa.

People infected with Ebola are contagious if showing symptoms, like a fever, and Hickox has argued that since she was not showing any symptoms, there was no need to keep her under quarantine.

Maine went to court to force her to stay at home in the town of Fort Kent. On Thursday, she went out for a bike ride with her boyfriend, tailed by TV cameras and the police.

“The state has not met its burden at this time to prove by clear and convincing evidence that limiting respondent’s movements to the degree requested is ‘necessary to protect other individuals,'” LaVerdiere wrote in the ruling.

He said Hickox must continue with direct active monitoring, coordinate her travel with public health authorities and notify them immediately if any symptom for the killer virus appears.

The judge also told Hickox to “demonstrate her full understanding of human nature and the real fear” that exists over the deadly virus.

“She should guide herself accordingly,” he wrote.

So far the US has treated nine Ebola victims, with one of them — a man who contracted it in Liberia — dying from the virus. Apart from two nurses who had treated the Liberian patient, the rest of the Ebola victims became infected in Africa.

In a press conference reported by CNN, one of Hickox’s lawyers, Steve Hyman, called the ruling “an indication of thoughtfulness versus irrationality.”

Hickox had become “a prisoner because of misconceptions and a whole host of irrational arguments,” he said.