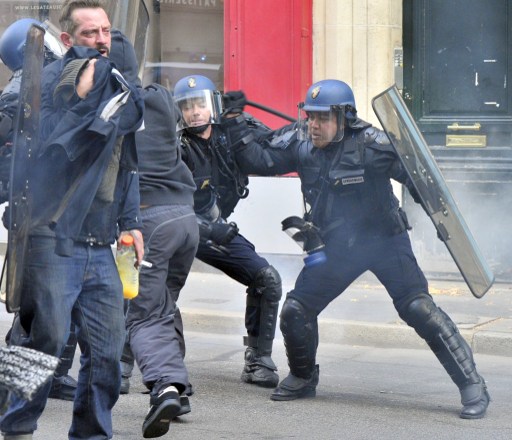 Officers fired rubber bullets and tear gas as demonstrators hurled bottles of acid and stones in the northwestern city of Nantes, injuring at least five protesters and three police officers.

Police made 21 arrests in Nantes, while in the southwestern city of Toulouse, where clashes also erupted, 13 people were detained.

The protests were held over the death of environmental activist Remi Fraisse, 21, who was killed last Sunday during clashes between security forces and demonstrators at the site of a contested dam in southwestern France.

Initial investigations showed traces of TNT on his clothes and skin, suggesting he may have been killed by a police stun grenade.

“This is a young man who was killed by the police, by the State, and we can not let this go,” said one demonstrator, Annaik, 23, as other protesters chanted slogans such as “pigs!” and “murderers!”.

Protests were also held in other French cities including Lille, Bordeaux and Avignon.

French Prime Minister Manuel Valls condemned the violence, calling it an “insult to the memory” of Fraisse, while Interior Minister Bernard Cazeneuve slammed the “unacceptable outburst”.

Cazeneuve said he had told police to “not give in to any provocation” and to use force only when there is no other means.

Fraisse’s death was the first during a protest in mainland France since 1986.

Authorities on Friday decided to suspend work on the dam.

It was “impossible” in light of the tragedy to “continue any work on the site” of the Sivens dam project in the Tarn region, said Thierry Carcenac, head of the Tarn’s executive council.

Ecology Minister Segolene Royal will next week gather together all warring parties to discuss the future of the Sivens dam.

Opponents of the project say the dam will destroy a reservoir of biodiversity and will benefit only a small number of farmers.

Those promoting the dam say it is in the public interest by providing irrigation and aiding the cultivation of high-value crops.