Alao-Akala not jittery over 2015 polls 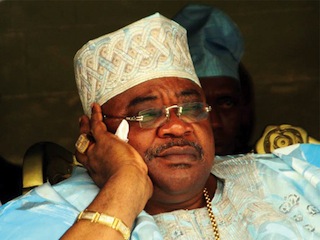 Team Akala, a support group for the re-election of former governor Adebayo Alao-Akala of Oyo state in 2015, has said that its principal is not jittery over the exercise.

The group said this in a statement signed by its Coordinator, Mr Niran Adeyoju, and made available to NAN in Ogbomoso on Sunday.

The group said a statement being circulated that Alao-Akala was jittery over 2015 was untrue.

The group also condemned the reports that its principal disrupted the distribution of voting materials for the ward congress of the Peoples Democratic Party (PDP) held across the state on Saturday .

“The former governor did not in any way disrupt the congress when it is obvious that he was already leading in virtually all the wards.

“There is no basis for him or any of his political aide to have led thugs to the party secretariat to disrupt the process of distribution of materials, when we are already aware that the congress was already in our favor,” it said.

The group said the report was one orchestrated by bad losers to smear its principal’s name, adding that it was the stock-in trade of those desperate politicians to cause confusion.

“We are aware of the desperate moves of some politicians who are bent on tarnishing the image and credibility of Alao-Akala by giving false information to the public.

“This, we hear, they are doing through their agents in the media and social media just because they have been mobilised to join forces with the opposition against the return of Akala in 2015.

“To us 2015 is not a do-or-die affair but a call to service. Alao-Akala has only yielded to the calls by the members of the public to return as governor in 2015.”

It called on members of the public to always disregard any damaging information emanating from the camp of the opposition both within and outside the PDP, urging media practitioners to be balanced in their reports.