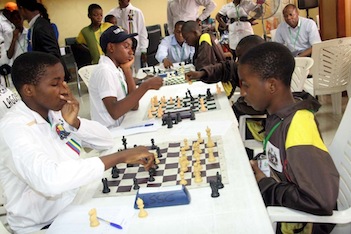 Lagos players, left, play against athletes from Osun State at the last DAWN Games held in Lagos in May this year

A contingent of 214 athletes, 23 coaches will represent Team Lagos at the 2014 National Schools Sports Festival which takes place in Oturkpo and Makurdi, Benue State from 6th-16th November.

Dr. Tandoh expressed his appreciation to Governor Babatunde Fashola (SAN) and the Commissioner for Youth, Sports and Social Development, Wahid Enitan Oshodi for facilitating the preparation and participation of the State at this years NSSF Games.

“Our athletes are in good shape for the 7th National Schools Sports Festival as they have been training and participating in various competitions since the beginning of the year. So we are expecting a good outing from them in Benue State and I believe we will surpass the second position recorded at the last School Sports Festival in 2013” said Tandoh, who was the Secretary-General, Local Organizing Committee (LOC) of the Eko 2012 National Sports Festival.

It would be recalled that Team Lagos won a total of 49 gold, 43 silver and 54 bronze medals to claim the second position at the 2013 edition held in Ilorin, Kwara State.