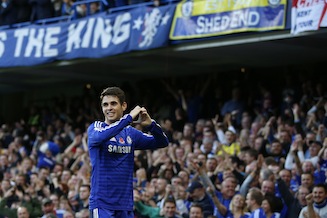 Jose Mourinho says Oscar’s best is yet to come after the Brazil international set Chelsea on course for a 2-1 victory over QPR.

Blues manager Mourinho was critical of his side’s overall display but reserved his praise for an influential performance by Oscar capped by an outstanding moment of individual skill to give Chelsea a first half lead at Stamford Bridge on Saturday.

Ultimately it took a Eden Hazard penalty, described as soft by QPR manager Harry Redknapp, to secure the victory that keeps Chelsea four points clear at the head of the Premier League table.

But Mourinho took encouragement from Oscar’s display and expects the midfielder to become even more influential when he recovers full fitness following a draining close-season spent at the World Cup.

“He played Sunday, he played Tuesday and today. Some other guys didn’t play midweek so I would expect other players to be sharper and fresher but for me Oscar was our best player.

“He is playing very well. Obviously pre-season was difficult for him after the World Cup but it is coming.

“He is doing a lot of running for the team, lots of creativity, and the goal is only possible in a very talented guy.”

Mourinho conceded his team did not play well but they could draw satisfaction from claiming three points despite not being at their best.

“It is important when you don’t play well to still win because that can compensate for other matches when you play fantastically well, deserve to win, but you don’t, which can happen,” Mourinho said.

Chelsea’s Spain striker Diego Costa returned to the team after missing four games through injury and Mourinho admitted the forward will take time to recover his best form.

“He didn’t have a very good performance, like the team. Normally there is a very close relation,” he said.

“A muscular injury is not just your body, it is your brain because after that you are afraid of reactions and it brakes you a little bit so hopefully for him the next game will be better.”

Redknapp claimed his team deserved more reward after dragging themselves back into the game when Charlie Austin’s 61st minute goal cancelled out Oscar’s 32nd minute opener.

The Hoops boss was particularly frustrated at the decision by referee Mike Jones to award a penalty when Hazard went down under a challenge from Eduardo Vargas.

But he drew positives from the game even though his side remain second bottom.

“And that’s important for us. We have to work hard in very game if we are going to pick up some points and get out of trouble. I think we deserved something for the way we worked.

“So the last three games there have been lots of positives. We should have got something out of the game against Liverpool, we beat Aston Villa, and we worked hard again against the best team in the country.”