Valencia up to second, Sevilla blow chance to move top 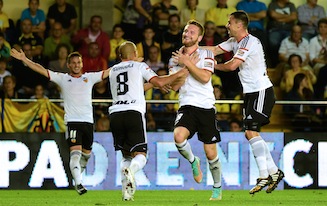 Valencia moved to within a point of La Liga leaders Real Madrid in second with an impressive 3-1 win away to Villarreal on Sunday.

Earlier, Sevilla passed up the chance to move top as they were beaten 1-0 away to Athletic Bilbao thanks to Aritz Aduriz’s stunning early strike.

The top five remain separated by just two points with Valencia and Atletico Madrid a point ahead of Barcelona and Sevilla.

Valencia got off to a flying start at El Madrigal as Manu Trigueros turned Sofiane Feghouli’s cross into his own net after just six minutes.

The hosts then went on to enjoy the better of the opening half but were denied by the in-form Diego Alves as the Valencia goalkeeper flew to his left to keep out Denis Cheryshev’s low drive.

Alves made another fine reaction save at the start of the second period to turn Bruno’s deflected free-kick behind.

And Valencia took advantage of those reprieves as Shkodran Mustafi headed home Pablo Piatti’s cross at the far post to double the visitors advantage.

The German international was on hand again to slam home the third from Fegouli’s low corner seven minutes later.

Trigueros did at least restore some pride for Villarreal by slamming home a consolation two minutes from time, but they remain eighth.

Barca’s shock defeat to Celta Vigo on Saturday had paved the way for Sevilla to take top spot earlier on Sunday, should they win.

However, they were made to pay for a slow start as Aduriz connected perfectly with Markel Susaeta’s cross for his seventh goal of the season.

Only a fine save from Sevilla goalkeeper Beto prevented Susaeta doubling Athletic’s lead before half-time.

Sevilla boss Unai Emery responded by introducing Ever Banega, Kevin Gameiro and on-loan Liverpool striker Iago Aspas, who had scored a hat-trick in the Copa del Rey in midweek, early in the second-half.

Yet, Sevilla remained short of ideas and Athletic comfortably saw out the second-half despite the visitors enjoying the majority of possession.