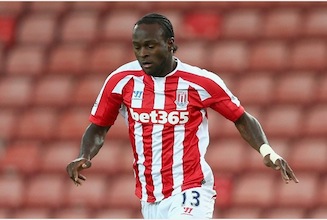 West Ham dropped out of the top four of the Premier League as their three-game winning streak came to an end with a hard-fought 2-2 draw away to Stoke on Saturday.

However, Sam Allardyce’s side could be satisfied with a point after falling 2-0 behind at the Britannia Stadium to goals either side of half-time from Victor Moses and Mame Biram Diouf.

But Enner Valencia brought the visitors back into the match on the hour mark before England wing Stewart Downing equalised for the London club in the 73rd minute.

The result saw West Ham move down the table, but only by one spot into fifth place, and left Stoke in 12th position.

Stoke came into this match on the back of successive league and cup defeats by Southampton, a side who like West Ham have exceeded all pre-season expectations so far this term.

West Ham arrived in the Potteries having won four of their last five matches.

However, they were without striker Diafra Sakho, who had scored in each of their last seven fixtures, because of a shoulder injury.

Stoke, despite missing suspended striker Peter Crouch, made a lively start and they were rewarded for their pressure in the 33rd minute when Moses scrambled the ball over the line after Bojan Krkic’s shot deflected off James Collins.

The goal meant Moses found himself centre stage for all the right reasons after being labelled a “cheat” by Swansea manager Garry Monk for allegedly diving to win a penalty against the Welsh club.

It was also Moses’s first goal for Stoke since his pre-season loan move from Chelsea.

Stoke continued to press forward, with West Ham goalkeeper Adrian making a fine save from Diouf.

But Diouf did make it 2-0 early in the second half when he headed in Jonathan Walters’s excellent cross.

Four minutes later, though, West Ham were on the scoresheet after Downing burst down the right and saw his cross, which evaded a couple of Stoke defenders, headed in by the diving Valencia at the far post.

Stoke looked to restore their two-goal advantage and Steven Nzonzi’s shot was well-saved by the diving Adrian before Diouf headed wide from a free-kick.

Mark Hughes’s men were made to pay for their missed chances when Downing struck from Valencia’s cross.

West Ham almost completed a come from behind win but Stoke keeper Asmir Begovic did well to deny the advancing Valencia while, at the other end, Adrian turned away Geoff Cameron’s shot.